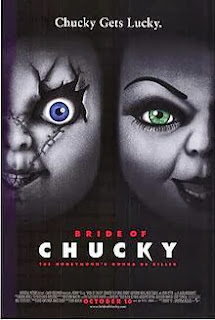 While fan opinion differs greatly on how the "Child's Play" franchise continued in quality, for the record I felt like it was significantly down hill overall since the first, there was a 'rebirth' of villain Chucky in the late 90s. Like many other horror franchises of major status including "Friday The 13th" and "A Nightmare On Elm Street," this new approach to the series takes a humorous turn. Rather than focusing on tension and scares that had been faltering with each subsequent entry, the fourth film in this franchise guns for over the top humor and ridiculous slasher kills. As with the other sequels this is going to be hit or miss with fans and non-fans. For me, while the film was hit or miss overall, I have a blast with "Bride Of Chucky" every time I see it.

That being said, it's easy to laugh at how this film has dated. Like every other horror film from the late 90s through the early 00s, the film has a distinctive style to it featuring gothic characters (in this case Jennifer Tilly who delivers a rather hilarious and sometimes creepy performance as the love interest of Chucky and eventually the titular bride in doll form), heavy metal soundtrack, and a reliance on humor in the kills that replaces the tension. This was something I was very into at the time of release, I was 13 after all, and to this day the film plays on my nostalgia more so then on my abilities as a critic.

As a critic, it's hard not to find a lot of the flaws in the film's plot. Most of the major plot points are played up for laughs instead of true scares including but not limited to: two in love protagonists that are being blamed for the murders and have to solve the mystery, a overbearing police chief (played by John Ritter, sleepwalking through the role) who must stop them because the main girl is his daughter and will not be romantically involved with her loser boyfriend, and of course our now infamous villain Charles Lee Ray who had to be stitched together by his long time girlfriend who had been looking for him since his "death" at the beginning of the first "Child's Play." The slasher elements here are handedly blue printed to be fit the formula to a 't.' In a way, its unoriginality plays into the humor a bit, but as a critic its hard not to want the film to run with its concept even further particularly when it comes to the duality of the two couples (hero and villains) in the end.

"Bride Of Chucky" is executed with enough flair and fun to sell the entire thing though. While the acting outside of the villains leaves quite a bit to be desired, Ronny Yu delivers enough fun and over the top charm to keep the viewers interested. It's easy to see why he would then be chosen to deliver a film in "Freddy Vs. Jason" later on as his use of humor, horror, colors, and darkness does have that unique flavor to it.

The humor and ridiculousness of the concept can be tough to swallow for many of the hardcore horror fans though and that's completely understandable. "Bride Of Chucky" is a massive deviation from the rest of the franchise at the time it was made. It's a love it or hate it kind of film and despite its massive flaws, I love it. I love the style, the quirkiness of its concept, and the awkward moments that it creates (including a doll love scene). Take it with a grain of salt though because if you try to over think it you're liable to get hurt.