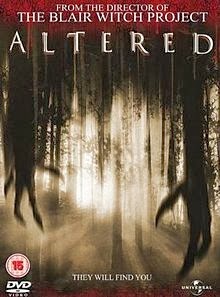 There were two reasons why I skipped out on "Altered" until now. One: I wasn't a huge fan of "Blair Witch Project" and this was before I finally got around to seeing some of Eduardo Sanchez's other films. Two: it was a straight to DVD film about hillbillies who keep an alien hostage. It doesn't necessarily inspire good faith of have hillbillies, aliens, and straight to home video in the same sentence. The trick of "Altered" is that despite all of the things I assumed it had going against it, Sanchez and company seemingly create a rip roaring science fiction horror film that works on almost every level. A definite surprise considering what I was expecting.

The film does some interesting things with the 'alien attacks people' genre of science fiction horror. Firstly, it focuses more on the horror elements and uses the science fiction as a means to a horror end which is much better for the lower budget constraints that it may have encountered with a full on science fiction plot. Secondly, it blends old school scares, black humor streaks, and some impressive special effects into a great combination. For a straight to video affair, this film has significantly high production values too.

"Altered" starts off with three country bumpkins out at night in their hunting gear, making the usual arguments about beer and hunting. What we come to soon realize is that they aren't night hunting raccoons or anything...they are out hunting aliens. Aliens who previously 'abducted' them who they plan on extracting a little bit of revenge on. The trick here is that they don't get slaughtered like the usual horror film would start...they actually catch one.

From there the film moves to a more isolated setting of their friend's house. The film then shifts gears into a "The Thing" inspired paranoia driven film. The acting, which was somewhat eye-rolling to start off, gathers some strong momentum here as the friends argue about what to do with the alien (which remains smartly hidden from viewers until the final act) and whether or not it was a trap for them to fall into. Paul McCarthy-Boyington heads up as the lead protagonist from here who seems to be the only one with enough brains to sort things out and pulls off the character with effective ease. "Altered" then rachets up the tension and scares by having situations get fully out of control. The alien has mind warping abilities, it's vicious with claws and teeth, and even our friends seem to be at each other's throats over what could happen next. This allows the pacing to fly along as we are treated to thick tension and some brutal moments of gore and special effects. I won't spoil too much here in that regard as the film takes some gruesome and unique spins of plot twisting.

While the ending was a bit of head-scratcher overall, "Altered" was a massively effective surprise of horror with a slight science fiction twist. Sanchez impresses with his style, this being essentially the only film that moves away from the 'in the moment' shaky cams and gritty style he normally uses that I've seen, and the film has strong production values for a straight to home video release. It's heartfelt, brutal, and smart in all the ways that make for a fun and great horror film. "Altered" comes strongly recommended for fans of tense horror films.