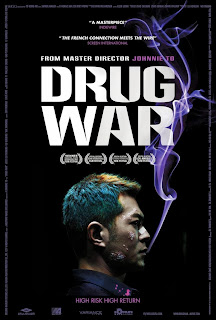 It's a sad fact that director Johnnie To will be one of the greatest directors ever to touch film that 98% of Americans will never know even existed. His continued excellence at delivering some of the best crime dramas and action films from Hong Kong is almost unearthly in speed. With the release of the latest, Drug War, you can add another film to his impressive resume. His latest crime action drama is a densely vicious film, slathered in a realistic and nihilistic tone that is powered by some truly impressively subtle performances and anchored by two insanely nuanced roles for both Louis Koo and Sun Honglei. It's not the most action packed of his films, but it's smoldering intensity and in the moment urgency make for an unforgettable cinematic experience.

Drug War isn't your typical crime drama affair though. The film starts off with a wounded and overdosing Timmy Choi (Loius Koo) swerving around in his car before wrecking it into a restaurant. While starting a film in the middle of a sequence might not be a new technique, what makes Drug War so interesting is that it's not some kind of silly gimmick to catch the viewers attention initially. Johnnie To and company seem intent on throwing the viewer right in with little to know in terms of explanation to why characters are where they are or any true back story to the plot we are going to be experiencing in the moment. We find out why Timmy Choi is the way he is at the beginning, but it's subtly explained through dialogue later on in the film so that we don't lose the shockingly brisk pacing the film moves at to steam power the narrative. While this kind of technique is not all that unusual for Johnnie To, it can be both a blessing and a curse. On one hand, it makes for an intense viewing experience with lots of mystery to its plot and character choices. On the other hand, we don't quite have the connections with the characters to care as much for what happens in said plot and are trust into the middle of a story. Drug War falls more in the former than the latter, but it's not out of the realm to see fans feeling quite disconnected with what's being delivered here. 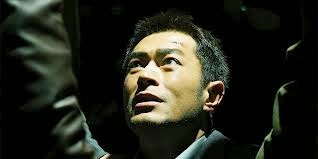 Outside of this intense choice of structure and writing for its in-the-moment narrative, Drug War is executed with perfection. Johnnie To has an eye to build forceful tension at the drop of a hat, including a trade off scene where our lead cop has to go undercover as two different clients to make the deal work, and his strong sense of gritty realism that he brings out of his actors and to his action sequences adds to the visual strength and plot progressions of the film. Both Louis Koo and Sun Honglei bring their A-games to the table too and are able to keep us interested in their tense interactions as criminal and cop without delving into their back stories. Even the action is remarkably well executed. As if I had any question at whether or not Johnnie To could pull off a gun fight, the finale is a beastly shoot out worthy of his name and one that thriller fans will love to watch again and again.

While I wanted the film to give us a bit more character work to bite into beyond the narrative playing in front of the audience, Drug War remains a very impressive crime drama as it is and executes its style and intention near flawlessly . It's pummeling in its dense pacing and plot, the acting is top notch variety, and Johnnie To delivers another film worthy of his legendary status. While it might not be for everyone, anyone who enjoys a great crime drama will want to immediately pick up this beautiful release when it hits shelves on October 15th.

Written By Matt Reifschneider
Posted by DarkReif at 4:38 PM