Last Will And Testament Of Rosalind Leigh, The (2013) 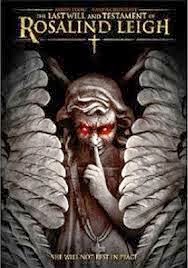 While most direct to home video films tend to be pure shit, occasionally, as rare as it is, one is able to find a gem of a film. A diamond in a sea of mediocrity if you will. This is just what "The Last Will And Testament Of Rosalind Leigh" came out to be. This little indie atmospheric horror film is not for everyone. Only those willing to buy into the concept and style are really going to dig into what "Rosalind Leigh" has to offer, but trust me when I say that if you are willing to step back and get lost in the atmosphere then it's a shockingly effective and spooky ride.

The initial concept for "Rosalind Leigh" is not a new one. A son returns to his forgotten home after the death of his mother to go through the possessions he has inherited. At the knick-knack and religious statue filled house, Leon seems to be haunted by memories of his almost cult like childhood with his mother as stranger and stranger things seem to happen around him. It's not a typical haunted house affair though. While the basic plot would indicate some sort of standard ghost film, writer/director Rodrigo Gudiño seems intent on taking it to a minimalist extreme with its execution...one that equals out to one man in a house for almost the entire run time.

It's a ballsy move for a film like this. Right away from the opening narration of Rosalind Leigh reading her 'last will and testament,' which kicks off a running thread that builds on the 'mythos' of the religious and cult like undertones of the film, it's obvious that this is meant to be more of a subtle film based on slight tones of atmosphere then anything else. The atmosphere is thick as fog too. While Aaron Poole might have to single handedly shoulder all of the film on his own, literally... since he's essentially by himself for the entire film with only voices to talk to instead of people including a very, very creepy scene where he speaks to a neighbor that we never get to see, it's the striking visuals and exceptional attention to detail that set "Rosalind Leigh" apart from its peers. The house itself starts off as a quirky charming set only to slowly take on a sinister, haunted, and foreign feeling as the film progresses. Rodrigo Gudiño uses a slew of fluid shots and clever camera angels to make the most mundane of items off kilter in the house. Never before has random hand-stitched sayings or stone angels given me the creeps so badly. It's ridiculous.

That being said, "Rosalind Leigh" is a very slow and methodical slow burn film. There are tons of little details and hints to be gathered throughout the film for the scares to work and Rodrigo Gudiño relies on what's not shown versus the normal jump scares to unnerve his audience and it may not sit well with all viewers. Rarely is there anything shown to scare us, although the minute pieces we are shown including a very disturbing sequence where a congregation on tape is asking an angelic statue to look upon them they are eerily effective even in small doses. This uses of long building tension pays off in dividends in the end...at least it did for me.

"The Last Will And Testament Of Rosalind Leigh" is a film that sits as one with such high execution visually and conceptually that it's damn near guaranteed to make my 'best of horror' list at the end of the year. It's a slow one, but it works so well with its tension and subtle writing that it had me completely engrossed through the entire run time. It's not quite a perfect film, but it's most certainly a unique one.