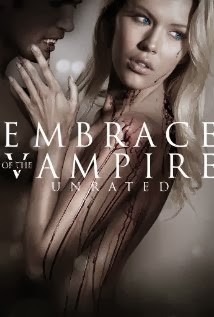 When it comes to the remakes, there are a few older films worthy of the update. One of those, at least in my opinion, was the original "Embrace Of The Vampire." The first film was a relatively terrible film that relied on its...exploitative nature to find its cult audience. So really, with a remake, you could only go up from the low brow nature of the original that tried to sell itself as something more artful. While I have to say that this version of "Embrace Of The Vampire" is technically better, the film itself still falls massively short particularly when it starts to crumble in the last act.

The film starts off very promising as we are introduced to Charlotte (played to at least show something more than skin by Sharon Hinnendael) who is finally on her way to a prestigious small private college on a fencing (?!) scholarship. The film builds a rather intriguing idea that she is somehow inherently connected to vampires from her past and then starts building up an almost slasher like vibe as we try to unravel whom the vampire that is making her have visions might be. While the 'who-dunnit' nature of this first half certainly has some fun to it, it's fairly generic still as Charlotte falls into a rather basic romantic subplot and struggles with the bitchy girls on her fencing team. There is at least some kind of plot as we add in her history with vampires and the 'who's the damn vamp' sub plot, but really the film fails to induce much more than the basics here.

Then to make matters worse, "Embrace Of The Vampire" falls into the pattern of still focusing on its exploitative elements instead of focusing on plot and characters. I suppose that I should have guessed that there would have been a couple of extensive sex sequences and random nudity throughout, they have to appease fans of the original I guess, but I was at least hoping that it would be better at making it seem far more relative to the plot. It's not. In fact, it became almost laughable at how much nudity they attempted to just fit in in background shots randomly.

Yet, there was still potential to some of the first two-thirds of the film. I mean, I still generally gave two-shits about what was going to happen to our characters even beyond the generic play of the film. The last third of the film though utterly crumbles under its own weight. The film takes so long building up subplots and other characters that "Embrace" eventually has to speed just to finish up the main storyline of the film. It desperately has to scramble to even do that so it rushes through any of the better story lines to get the job done.

I'm sure that there is certainly a group of people that will love this movie, but it sure isn't going to be for its plot progressions or strong character work. The film just falters on almost all grounds as it struggles to find balance between a serious vampire film and an exploitation film. I'm sure if you are interested in the film then you will have already seen it and if you haven't...then I suggest waiting for a bit for a rental before diving in. It's not quite the redemption of film making that I was expecting.