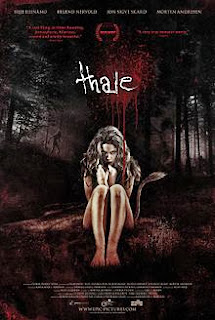 Knowing that this film was a "do it yourself" kind of endeavor before hand, certainly added a bit of charm to it. Aleksander L. Nordaas served as the film's director, writer, editor, producer, cinematographer, and he helped build all of the set's in a basement. With only a budget of $10,000 and knowing the heart and soul that Nordaas injected into "Thale," one has to love this film right off of the bat. Considering said circumstances, "Thale" looks remarkably sleek and comes off as handedly competent in its execution. While the film might not be your average horror film with its significant fantasy elements and dramatic character driven tension, "Thale" is the kind of film I can support through and through.

What's most impressive about a low budget film like this is that Nordaas and company seem very confident in creating atmosphere. When you don't have a lot of budget for effects or sets, you have to focus on characters and storytelling and "Thale" does it with some impressive effect. "Thale" focuses down on two leads, an odd couple of sorts who go to death scenes to clean up the 'mess' when the police are done with their investigations. On their latest though, they stumble upon a secret room where they find a young woman naked in a tub who does not speak. While this might seem like the beginning of a horror film (or a porno, I suppose), "Thale" takes a different tone for the film. Instead it focuses on creating character development in how the two react to the strange circumstances and starts building a tale, as told through a few flashbacks and via tape recorder found in the basement, of just what this woman is and why the men are in danger for even knowing she's there. Its character driven and atmospheric which sells the film very well in the end.

Strong performances really ground the film down from the normal ridiculousness that the fantasy elements could have brought to the table. A vulnerable and yet somehow dis-alarming performance by Silje Reinåmo leads the scene stealing and considering the film is essentially a three person show that says something. The special effects, what little there are, are strong too even if some of the CGI towards the end shows the films budget. While I could have used a bit more of the horror nuances showcased in the finale act a big earlier, the film balances the drama, comedy, fantasy, and horror remarkably well and will please many independent film fans.

"Thale" might be a bit of a slow film for most folks and those looking for a horror film are going to find a far more complex and fantasy driven flick here then they were expecting, but if you keep an open mind then there is plenty to love about this low budget film. Here's to hoping that Nordaas has a long career with the talents he brings to the fold in "Thale" and that the sequel, which is in the pre-planning stages at this point, takings the story to some intriguing new places.