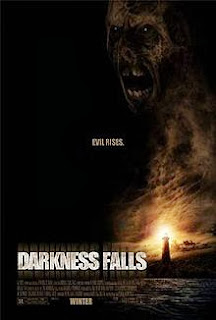 The worst kind of films are the ones that have potential and completely drop the ball when it comes to executing it. Take "Darkness Falls" as a prime example of this...a rather intriguing supernatural slasher film built on the tooth fairy where she's hunting a man who slipped through her fingers years prior. This is horror gold! A crazy ass monster ghost lady slaughtering anyone who sees her? She burns in the light? A sleep deprived anti-hero protagonist coming back home to save his old sweet heart and her young brother? This shit writes itself, truthfully. Yet as I watched "Darkness Falls" for the first time since theaters (has it already been ten years?!), I felt like I should weep for this film as it continually fumbled around creating a story and even holding its own rules accountable.

In an interesting twist of fate, this would be Jonathan Liebesman's first film (he would go on to direct "Texas Chainsaw Massacre: The Beginning," "Battle: Los Angeles," and "Wrath Of The Titans") and his catering to the modern style certainly shows. With tons of quick edits, flashy zooms, and outrageous close ups he does his best to kill any tension or true scares this film could have ever had by trying to make it "energetic." What little tension he is able to make with the use of dark and light is completely shot by this approach and it leaves "Darkness Falls" feeling slapped together and ADD in its style.

To add insult to injury, the script that this concept adheres to is terrible too. Our main anti-hero is wishy washy, the romantic subplot is poorly constructed, and the film rarely is able to piece together a narrative if it wanted to. Characters seem to do the most ridiculous things with their motivations and the actors are completely at a loss to try to counter balance the weird arcs that they have.

Then we get into the villain which is such a cluster of plot holes that its hard to stomach. The entire concept that she can't come into the light is a reach to begin with and "Darkness Falls" seems to have no idea how to stick to the rules with its villain. She seems to be quicker than the speed of light half of the time, leaving a fun sequence where they have to jump down a flight of stairs from light spot to light spot, yet half of the time characters are hanging out in the dark with little to no consequence. Most of the kills are mundane or done off screen and they hint that she has the ability to teleport (how else would she be able to get the kid when he goes into the sensory deprivation chamber?), but never use that to its full advantage. It's so wishy-washy in execution it becomes a joke rather than the modern horror villain classic it should have been.

The film's not a complete waste of time with its fun concept and unintentionally hilarious moments. It just so happens to have a film built around it that is so utterly inept that any self respecting horror fan vomits a little thinking about the wasted potential. While this film might have a following at this point, my guess is that the cult status it achieves might be for how bad it is rather than a missed gem.

Written By Matt Reifschneider
Posted by DarkReif at 7:01 PM