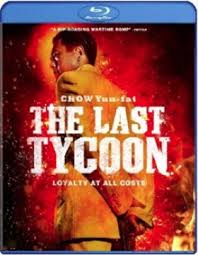 While Chow Yun Fat might not be doing the action packed films he was doing 15 years ago, he consistently thrills every time he appears onscreen. Well outside of "Bulletproof Monk," where he might have been the one saving grace, he usually appears in only top tier films. You can add "The Last Tycoon" to that last too. While this epic historical drama might not have as much action as I would have hoped to cater to the 'gun fu' fan in me, the riveting tale of a poor man rising to the top allows for some of his best work in a film that deserves more accolades in the world wide scene then it has been receiving.

Cheng Daqi (Chow Yun Fat) has had a rough battle in his life. Growing up poor, he lost the love his life when her father made her move to find a better life and in an attempt to make something of himself he joins the criminal underworld under the guiding arms of Hong Shouting (Sammo Hung). There he rises quickly to become one of the most powerful men in Shanghai only to find himself at the mercy of a war against Japan that could ruin everything.

As I sat watching "The Last Tycoon," I kept having a recurring thought. Why has this film been so massively overlooked? While it has gotten to the point that Well Go USA has been delivering unique and fantastic Asian films over and over again, why wasn't there more coverage of "The Last Tycoon" at the various film festivals and international markets when it was first released? As is, it leaves this intense drama as a relative precious gem undiscovered for many fans and if it wasn't released by a mainstream distribution company like Well Go to get it into our hands.

Now I'm sure you are left with the question, why is this film such a gem? Let's start with its challenging plot. While the structure of the film tends to leave a bit to be desired as it leaps between two time periods (one that explains how he rose to power as a young man and the other his fall from power at the onset of World War II), the journey there as a character study is strongly expressed. "The Last Tycoon" is beautifully shot to maximize its sets including a 1930s Shanghai and the film is grounded with phenomenal performances from Chow Yun Fat and a rather impressive performance from Huang Xiaoming who plays a perfect younger Chow Yun Fat. While the secondary cast tends to always play second fiddle to our leads, there is some very impressive performances there with Sammo Hung and Francis Ng delivering instantly memorable roles even with little in the way of full character development.

"The Last Tycoon" also has a few solid action set pieces that really impressed me. While I wasn't necessarily expecting them, I was far more focused on the great character study and historical placement, fans of gun fu era of Chow Yun Fat will be surprised to find a couple moments tucked into the film. A massive street fight has some brutal knife fights, there is a John Woo inspired church shootout, and the finale is both heart-breaking and epic in its scope as our lead Chen Daqi decides to step up to be the heroic man we've seen him as outside of his rise to power using illegal means. Even if none of these moments are the focus, they are a welcome addition to a film with solid foundations.

If anything, any of the structural flaws or underdeveloped sub-plots (including a love triangle that feels like it needed a bit more meat at the end) is that this film is too large for its play time. Most of it is great when it happens, but it's hard not to crave a little more. When "The Last Tycoon" delivers its A+ material from its story to its character work to it's impressively shot action moments. It's not perfect (is there any film that's truly perfect?), but dammit this is truly a gem of Chinese modern film making that should have garnered much more attention then it has thus far. If you are a Chow Yun Fat fan, then you have to purchase this film. "The Last Tycoon" is a highlight film in his career.

"The Last Tycoon" gets its official release from Well Go USA on September 17th, 2013. The links below can be used for purchase and pre-order. Support foreign cinema. Support Well Go USA. Support Blood Brothers. Order your copy right now!