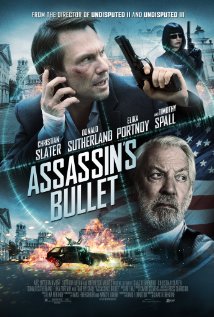 Isaac Florentine might not be a A-list director, but it’s hard not to love the fully embraced B-grade awesomeness of his previous films like “Ninja” and the “Undisputed” sequels. When I discovered it was the same Isaac Florentine that was behind this straight to video action thriller “Assassin’s Bullet,” the film went up my viewing queue pretty quickly. While the film was more of a thriller than action, it still very much catered to that same ridiculous vibe that the rest of his films do – albeit without as much of the charm.

When an Embassy worker (Slater) in Bulgaria is asked to assist local law enforcement hunt down a vicious assassin who has been targeting terrorist cells, he reluctantly agrees despite vowing to never do law enforcement again after the death of his wife and his retirement from the FBI.

In an interesting twist on my expectations of the film, there is actually two leads to “Assassin’s Bullet.” While the cover art work and synopsis above might indicate Mr. Christian Slater as our lone hero on the case, he mostly splits time with the female lead Portnoy. While the Slater plot provides most of the basic thriller elements as he investigates some deaths and haphazardly sifts through a generic anti-hero character depression about his wife’s passing and overcoming it, the Portnoy plot adds a more dramatic spin. Unfortunately, she has a bit of trouble carrying the film with her acting and the “twist” of the film is so ridiculously obvious that I failed to even consider it as an option thinking it to be far too cliché for someone like Florentine. It does create some unique plot crossovers that give the charming Slater a bit to work with, but even the best efforts to create intrigue seem to fall flat on this thriller portion.

To add a bit of insult to injury, “Assassin’s Bullet” seems a bit light on the action too. Florentine is known for his action work, so when it does rear its silly head it’s a welcome return to ridiculousness that the film desperately needed to keep its pacing. We get a few assassination moments of intensity including a one person raid and towards the end our hero and villain collide in a brief fist-to-cuffs before there is a bit of gun toting destruction. If it wasn’t for the finale though, it would be hard to call this film even remotely action though which in itself is going to disappoint Florentine fans.

All in all, “Assassin’s Bullet” entertained for an hour and a half as a cheap thriller, but it wasn’t even near being Florentine’s best or even most entertaining film even if you are a Slater fan. Luckily, Florentine seems to know this and his next film will be “Ninja 2” as he returns to directing Scott Adkins. I think the results might be a little better then this.