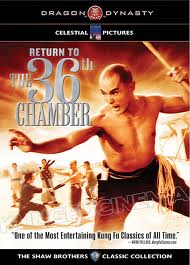 It's no secret that "The 36th Chamber Of Shaolin" is highly considered to be one of best Shaw Brothers films, if not one of the greatest martial arts films of all time. So for director Lau Kar Leung and star Gordon Liu to return for the sequel, it would simply have to be another perfect to damn-near-perfect kung fu film, right? Well in the case of "Return To The 36th Chamber," the film on hand takes a significantly different direction and comes off as an odd man out compared to the original one. While the film does have a handful of things going for it, including some amazing action, the rest of it does come off as rather disappointing in comparison.

When a corrupt boss begins to incorporate mob enforcers to keep his workers from uprising against his terrible work conditions, a small group of them decide that they have to stand up for themselves. They decide to use a con man Chu Jen-chieh (Gordon Liu) to impersonate the righteous Shaolin monk San-Te and try to set things straight...but when it all starts to fall apart Chu Jen-chieh might just have to get some real martial arts training to set things right.

Although its hard to go wrong with Lau Kar Leung behind the choreography, his experimental streaks can leave some of his films hit or miss overall. Even with a stellar film like "36th Chamber Of Shaolin" to build a franchise on, "Return" takes a comedic turn and gives the series a bit of a shake up. As was the trend in the 80s for martial arts films (thanks mostly to the likes of Jackie Chan and Sammo Hung) a solid portion of slapstick humor was injected into this film. While some of it works, Gordon Liu actually pulls off the overly serious/silly switch ups with ease, some of it doesn't as most of the secondary cast comes off as caricatures instead of thoughtful roles to help support the plot and lead. Hell, even one of them has massive buck teeth (and I mean MASSIVE) that's played to complete seriousness. Half of the time I wasn't sure if the film was trying to be funny or if it was just poorly written and oddly timed.

Along with the film's humor, "Return" pulls an odd maneuver when it comes to Gordon Liu and his role in the film. While the idea of having him play a different character impersonating the character he played in the first film had some comedic potential to it, the fact that they cast someone else to play his role from the first film later on in the film is such a massively missed opportunity for comedy and for some clever camera and stunt work. He owns the role well here and his humility feels well earned so that his rise to the top is glorious, but why wouldn't they take advantage of such a great concept? It was just silly.

The story might parallel some of the 'people fighting for their rights' morals to a rather cliche extent and some hit and miss comedy graces the rest so its a mixed bag to that extent. The film's saving grace comes in the form of Lau Kar Leung's stunning choreography. The fighting tends to be more for comedic value in the first two-thirds and it's followed by one of his patented extensive training sequences where our hero has to put scaffolding all around a temple, but the finale is a complete stunner. When our hero has to take his "scaffolding kung fu" and battle a handful of villains led by a man using "bench kung fu" - it's a kung fu fanatic's dream. Even when Lau Kar Leung's films are hit and miss, his fight work is always beyond phenomenal and it saves this film from tripping up too much.

While "Return To The 36th Chamber" might not be the impressive sequel I wanted it to be to one of the best kung fu movies ever made, it's entertaining in its own right and the action in the finale makes it worth the purchase alone. Most of the comedy is hit or miss and it tends to feel too safe for the opportunities that its script allows and it's hard to dismiss that overall. It's disappointing, even if it has some redeemable qualities.