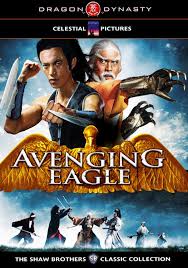 Just recently The Weinstein Company announced that they had made a deal with Celestial Pictures to remake two classic Shaw Brothers films. One of those films was "The Avenging Eagle." While I have owned the film for quite some time thanks to Dragon Dynasty, I had never gotten around to actually seeing the film and this news made me curious to why the film would be one chosen. Now I know. "The Avenging Eagle" is both a classic kung fu film with its themes and relentless martial arts set pieces, but it's also a fairly dynamic film visually and in conception. While the film might not have garnered my attention to begin with, "The Avenging Eagle" has it now as an instant Shaw Brothers classic.

When a wandering man in black Chik Ming-sing (Ti Lung) is saved in the desert by another mysterious nomad (Alexander Fu), they find themselves at odds at first. When it's revealed that Chik Ming-sing is one of the murderous Thirteen Eagles, an assassination clan raised from birth to be killing machines for a vicious gang, the two realize that their goals may not be all that different. Particularly since Chik Ming-sing has denounced his killing ways and looks to kill his master (Ku Feng) for all of his sins.

What makes "The Avenging Eagle" a rather unique experience for me is that it's the first film I've seen directed by Chung Sun. While he would go on to direct two other Shaw classics in 1979 ("The Deadly Breaking Sword" and "To Kill A Mastermind" respectively), this was my first experience with him and wowza does he deliver. His style is reminiscent of a mixture of Chang Cheh and Chor Yuen. He allows the fighting to really develop in some violent and emotional ways, but his camera angles and thoughtful visual dynamics are much more epic (like Chor Yuen). While his use of slow motion and odd pauses can be a slight momentum killer, his long angle shots and clever energetic angles make for a film that simply feels more dynamic and it adds a whole new energy and freshness to the Shaw Brothers style.

To add to this, the duo of Ti Lung and Alexander Fu as hesitant partners makes for some great on screen chemistry. While the film does some interesting leaps in time, having two significant flash back periods involving Chik Ming-sing's life, both actors are up for much of the emotional subtext that's needed to make the film work. While it would have been nice to see some of the supporting roles get a little more meat to their bones, including a romantic subplot done in flashback that occurs within a minute span, our two leads and conniving villain make for some great moments.

While a strong director and cast do make for a better film all the way around, "The Avenging Eagle" definitely knows that it has to be filled to the brim with action and just a hint of cheese. It delivers on the Shaw Brothers promise too. Right away we get some fun fist bickering between our leads that culminates in a great fight over a torch, but when the first of the Thirteen Eagles show up clad in bright color coded outfits and each sporting a unique weapon we finally understand just what the film is going to give us. The fights are all memorable and unique in this manner, gimmicky perhaps with some odd weapons including hidden shoe daggers and a finale featuring our villain with Brass Eagle Claws on his hands, but the choreography is quite impressive and the flow is superior. Kung fu fans will not be disappointed.

While I wasn't sure why this film was chosen for a remake at first, it's quite clear now. The story of loyalty, betrayal, and redemption is one that is quite universal and the characters with their chemistry can be updated with relative ease considering the strength of the film's foundations. Not only that, but the story leads to some great villains and fight sequences that ought to bring out all of the kung fu fantatics. "The Avenging Eagle" is a true hidden gem for this reviewer and one that I will not soon forget.