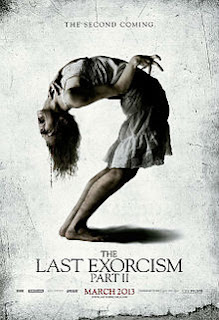 Despite my initial distaste with found footage horror before heading into the first film, it was a film that ultimately won me over with strong story telling and a twist ending that had me for a loop. Ironically, I wasn't sold on the sequel going into it either - which is perhaps the reason it took me so long to actually get around to seeing it, but I kept up a smidgeon of hope that, like the first film, it would win me over in the end. I wasn't so lucky this time around. "The Last Exorcism Part II" (a hilarious oxymoron of a name) has a few things going for it, but when the script is deliriously illogical and forced nothing much helps overall.

Nell (Bell) survived. She survived the vicious ordeal that consumed her family when an outsider tried to exercise her from a demon inside of her named Abalam. She only has vague memories of what happened and a young girls home takes her in to get her rehabilitated for the 'real world.' Everything seems to be going fine until she starts to see visions of violence and nightly terrors begin to unravel in front of her. Is Abalam really gone or has the madness just begun?

When a film like "The Last Exorcism" pops up and takes you by surprise in quality, it's hard to swallow a sequel that so blatantly disregards what worked in the first film. Not that I ultimately want rehashed films, but "The Last Exorcism Part II" attempts to take Nell and her demon loving tortured life into some new directions that don't necessarily work. Primarily because these new directions happen to be even more cliche and mundane. While the first film had a twist ending that took its 'exorcism' beats and twisted them in a way that had you blushing from making all of these assumptions, this second film tends to just follow the formula to boring regards with little pay off for your investment.

Nell, this time played with impressive chops by Bell that subtly reminded me of the strong and awkward work of Spacek in the original "Carrie," goes through a brief glimpse of hope to be thrown back into some cliche plot progressions. Oh no! She's starting to see visions of death and paranoia! Oh no! No one believes her! An underdeveloped romantic subplot? Never saw that one coming! It's so mundane in originality that when the film does throw in something unique, including a random and completely underdeveloped subplot featuring a group of religious/voodoo folks who have been watching Nell in case the demon returns, seems so ill fitting in this formula that it chokes you to consume. It's enough so that even when the "twist" ending comes about...one that feels very unfitting for the entire premise of what the first film indicated with its ending...it didn't matter if it worked or not because I could give two shits.

Now that being said, "Part II" isn't a complete loss. There were two things that the film essentially has going for it. 1) Ashley Bell owns her role here. Considering the last thing I saw her in with the horrendous "The Marine 3," I was totally sucked into her quest for redemption and climb for normalcy. Her performance almost carries the film. Almost. 2) The switch from 'found footage' format to classic film making. While this idea failed for "Blair Witch 2," here with this film it was a stronger choice. Director Ed Gass-Donnelly does his best to really utilize the New Orleans' setting for maximum atmosphere and while many of the scares fall insanely flat conceptionally, his old school style of long takes and static tension make the most out of what is an otherwise useless script.

"The Last Exorcism Part II" isn't a terrible film overall, but even compared to the first film it's a fumbled film. Despite a few solid executions in atmosphere and with Bell's performance, the film just can't stand on its questionable script and terrible structure. Not only that, but the ending of the film was down right idiotic compared to the right hook of the original. Even if you are a fan of the first one, I suggest tentative viewing of this sequel.

Posted by DarkReif
Email ThisBlogThis!Share to TwitterShare to FacebookShare to Pinterest
Labels: Horror, Suspense / Thriller, The Devil Made Me Do It