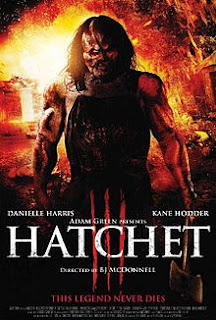 The third and final installment in the over the top 80s inspired slasher, “Hatchet III” goes out in a bang while trying to top its predecessor. While Adam Green is not in the director’s chair this time round (which is filled in by BJ McDonnell) Green wrote the screenplay and his touch is still very apparent in part three. Kane Hodder is back as the unstoppable Victor Crowley and Danielle Harris also reprises her role. What really stands out in “Hatchet III” in comparison to parts one and two is the cast. With stars like “Gremlins” and “Waxwork”’s Zach Galligan and “The Texas Chainsaw Massacre 2”’s Caroline Williams to name a few, the film continues to pay homage to the decade of horror where slasher films went rampant. The addition of such cast members puts “Hatchet III” in the right direction as it’s indeed a worthy cap to the end of the franchise. The series ends before the franchise goes well past its due date and becomes stale, something that the “Saw” franchise should have taken note of. While this is true, it seems to be my biggest complaint as it seems it is now time for Victor Crowley to take his leave.

While any viewers who have been caught up may be wondering how they could possibly continue from part 2, we are treated to the classic supernatural twist that keeps “Hatchet III” going on and on its legs. It is absolutely ridiculous, but it’s good news in this case as if a bunny rabbit is being pulled out of a magic hat. There is no room for common sense in the “Hatchet” franchise and rightfully so, making the twist excusable and just an addition to the campy feel of the film. Danielle Harris is not as prominent in her role this time around as she takes a back seat during the middle of the film to let the rest of the cast get some screen time. They all do a great job including series regular Parry Shen who is just another staple of the trilogy. Other notable actors like Derek Mears (“Friday the 13th” 2009) and Cody Blue Snider (son of famed singer Dee Snider) and Sig Haig brings in great entertainment value and clash well with the rest of the cast. But of course, our real shining star is none other than Kane Hodder.

In comparison to the last two films, “Hatchet III” has by far the highest body count which is accomplished in an even more over the top fashion of the previous two films. Since Victor Crowley is now a more established character, we are treated to less of a typical slasher much like the first with its more 80s roots and more of an all out gore fest. At this point, it’s safe to say that Adam Green wanted to let Victor Crowley run loose for his big finale. Kane Hodder doesn’t disappoint, especially in one montage where I’m sure the lens ran red with blood more than a few times! Not to say that we aren’t treated to some comedy as well though it isn’t overly abundant. The effects team does another beautiful job on the practical effects, especially at the very beginning and end, which is sure to please gore hounds. 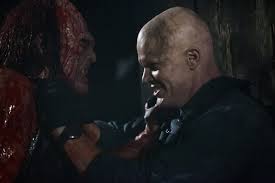 Overall, “Hatchet III” is a fun gory slasher that is even better than the previous entry. Yet nothing will touch the spirit of the first. BJ McDonnell does a fairly good job of filling in Adam Green’s shoes and you can feel the enthusiasm of the cast flowing through the screen. Slasher fans can now rejoice as we bring an end to another horror legend. Will Kane Hodder return to the big screen as another legendary boogeyman haunting oblivious individuals in the dark? Only time will tell, but for now we will always have Jason Voorhees and Victor Crowley to look back on.

Written By Elise Holmes
of
Ramblings Of A Deadite
Posted by DarkReif
Email ThisBlogThis!Share to TwitterShare to FacebookShare to Pinterest
Labels: Comedy, Fantasia 2013, Horror