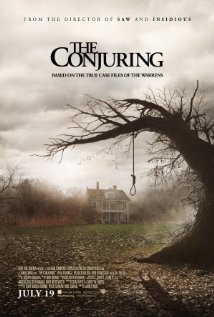 Fuck you, James Wan. Seriously. As much as I love the guy for what he has done for the horror genre in modern times, he’s almost too good at what he does and even gets a veteran horror fiend like myself unnerved. With his latest horror opus “The Conjuring,” Wan goes for the throat on 70s style haunted house flicks. While the haunted house genre might not be new for him, the guy did deliver the first half of “Insidious” with perfect results, “The Conjuring” fully embraces the simplistic genre to great effect. Despite some structuring and scripting flaws, this latest scare-athon is an impressive jump scare effort  that had me on the edge of my seat.

When the Warrens, a couple who bide their time investigating and fighting the forces of darkness, are approached by a blue collar family about some frightening things in their home, they decide to investigate to help out the family of seven. What they find in this house is multiple spirits all held there by one demonic force that seems to only want blood.

The brilliance behind James Wan is that outside of the game changing “Saw,” all of his movies are essentially throwback films to a film time previous. He’s not out to change the horror scene anymore, but delivering strong, thoughtful horror films. “The Conjuring” follows suit. Is it original? Not by any means of the word. It’s a sly mix of “The Amityville Horror” and the 70s obsession with exorcism films, but I’ll be damned if he doesn’t deliver a truly engrossing experience.

“The Conjuring” even goes as far as truly utilizing the 70s atmosphere of its time setting. The film focuses on crafting thick atmosphere driven by long full shots, tension filled pacing, and strong music/sound development. Like “Insidious,” Wan uses true tension and jump scares to make the film utterly frightening instead of gore or extremism of visuals. Even when nothing happens, as one of the daughters of the family looks under the bed to find nothing, we are filled with dread and only assume that the red herring of the bed is to be punctuated with something far worse. None of the jump scares are all that original yet “The Conjuring” uses such intensity with its approach that we can’t help but be frightened by what we know is coming. A clapping sequence that was used in the initial trailer of the film had the audience in complete shambles in the theater despite most of us knowing what happens. This is the power of “The Conjuring” in its scares and it’s something truly impressive to behold.

Outside of obviously strong scare factors, “The Conjuring” tends to be a strong but mixed effort. The acting is impressive on many levels, but the film tends to miss out on some character growth due to its large set of characters. While I appreciated that the film focused both on the Warrens and the victimized family to give us something to latch onto and care about, it tends to be a bit much sometimes for the film to cover. This, along with some odd structuring that includes flashbacks that aren’t really needed, does prevent “The Conjuring” from reaching a perfect status.

Despite a familiarity of concept and a 70s style of filmmaking that I have seen a million times over, Wan and company still deliver a film that had me engrossed and fascinated with its suffocating tension and pants-wetting jump scares. “The Conjuring” might not be his best effort to date, but it’s one of the best horror experiences this year.

Written By Matt Reifschneider
Posted by DarkReif
Email ThisBlogThis!Share to TwitterShare to FacebookShare to Pinterest
Labels: Horror, The Devil Made Me Do It