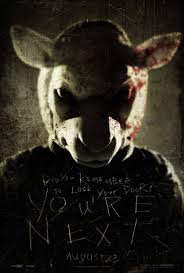 Although I don't have a review up for it, I will start this review off by saying that I've had mixed feelings about Adam Wingard's film career after seeing "A Horrible Way To Die." It certainly didn't inspire a devotion to me overall as a modern classic like some claimed, but his last three short films that were included in "V/H/S," "V/H/S/2," and "ABCs Of Death" had me impressed. So I was tentative about "You're Next" even after the slew of great reviews its garnered in a long (very long) festival run. This is why it brings me great pleasure to say that "You're Next" is a fun and inspired modern horror film that delivers on most of its promises.

When Crispin (Bowen) and his girlfriend Erin (Vinson) accepted to meet his parents and all of his siblings for an anniversary dinner in their summer home in the woods, they knew it was going to be a bit of an awkward get together. While they have never really gotten along, they were willing to try and put it to rest. Unfortunately, a set of three masked villains have other plans for the family...and they want to put them all to rest too.
It's no secret that home invasion flicks have become a cornerstone of the horror genre. Everything from modern classics like "The Strangers" to disappointments like "In Their Skin." The problem with the genre, like most thriller type horror films, is that they tend to be repetitive and then solely rely on execution or gimmick to work. When it works, it's a beautiful thing. In the case of "You're Next," Wingard and company take the home invasion foundations and add enough nuances of various other genres that the film comes off as massively entertaining without losing what makes this particular sub-genre a blast to watch.

Right away from the get go, "You're Next" sets itself out to be more along the lines of a slasher. Just in the opening sequence, we get sex, nudity, and death along with a couple of great moments of tension. The film then sets about to establish itself as a slasher of sorts when we are introduced to are basic "home invasion" premise with a family get together of awkward moments that's interrupted by a sudden and seemingly well planned out killing spree. While this is not anything new to the genre, Wingard makes it qutie effective by dabbling in a bit of humor and really focusing down on the tension and the 'who's next' horror guessing game of the audience betting on who bites it. While the execution is damn near spot on, the film tends to play it pretty formulaic to this point.
Then something magical happens with the film. Writer Simon Barrett with Adam Wingard adding in a strong visual focus, starts to twist the "home invasion" tale. What starts off as a classic slasher premise and formula suddenly starts taking on more modern 'trap' elements albeit with a slightly "Home Alone" home crafted variety as our survivors with a surprise leading character begin to fight back. The film almost kicks off into a tense thriller path with nods to films like John Carpenter's original "Assault On Precinct 13" vibes (which is then thrown back more so by a great 80s synth like score that pops up in the film's latter half). While the plot does take some rather predictable twists that I will leave open for those wanting to see it fresh, the strong gore special effects and dark, dark, dark streaks of humor fully bloom in this second half to kick the film to a next level.
Wingard's directorial style blends a bit of old school with a bit of new school (he still tends to shake the camera a bit too much for my tastes), but with some strong performances from our leads, some solid secondary performances - some of the characters don't even have time to fully develop before they start dropping, and a cleverly crafted script, "You're Next" takes a rather mediocre time at the movies and injects a fresh feeling of smart and entertaining fun to the slowly decaying 'home invasion' sub genre. It's definitely not a perfect film as I felt the plot twists were a bit too obvious and there were some moments that didn't quite work as a lot of the tension in the second half was sacrificed as the twists were busted on the audience too early, but it's hard for me not to still qualify "You're Next" was one of the best horror films of the year and one that I massively enjoyed seeing in the theater.