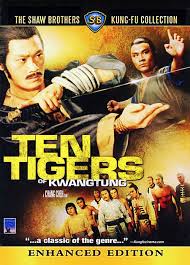 The fact that “Ten Tigers Of Kwangtung” had an essential all star cast of Shaw Brothers A-list martial artists and was directed by the illustrious Chang Cheh instantly sets it up for failure in many ways. While one might want the film to be an “Avengers” like accumulation of charm, action, and awesomeness, the film comes off more like an “Ocean’s Thirteen” with far too much talent that’s essentially wasted on throw away characters and an overly ambitious plot that seems unsure of what to do with half of them anyway. While the film is saved to some extent by its star power with a few strong performances and a strong sense of action sequence pacing, the rest of “Ten Tigers” stumbles to get it right overall.

When a young man and corrupt leader combine forces to extract revenge on five young ‘brothers’ they set into motion a plan to bring the legendary “Ten Tigers” out of hiding to finish a plan that failed years prior when the Ten Tigers originally joined forces to establish a rebellion against the authorities.

The idea behind “Ten Tigers” is quite simply…fucking epic. Ten legendary fighters teaming together to kick start a rebellion against the authorities? A cast of legendary Shaw actors like Ti Lung and a handful of the Venoms mob make for a film that any self respecting Shaw Brothers fan needs to see and under the direction of Chang Cheh, “Ten Tigers” does sport some charismatic performances all the way around as each member comes packing with a gimmicky kung fu style to help out including a man whose fingers are unbreakable and immensely strong. While the action is impressive, particularly towards the end, it’s the cast that’s the most impressive of all.

“Ten Tigers” isn’t the perfect film though. Despite all of the elements it has going for it with cast and director, the concept of “Ten Tigers” is simply too big for the film. It’s almost like there was a “Ten Tigers” and a “Ten Tigers” sequel that were mashed together to try and make one large epic film. The main story is actually about the Ten Tigers’ sons who are being killed off one by one by the vengeful son of a corrupt leader whom the original Ten Tigers had to kill in their rebellion. So the film jumps back with elongated flashbacks to the original Ten Tigers (this is where are amazing cast resides) and how they came together outside of their differences to kick ass. It then jumps back to the present to continue the main story. The leaping back and forth tends to be a little jarring at times and while most of the character development is left for the flashbacks, the sons of our heroes tend to be left with little in the way of development. There are far too many characters to begin with in both stories, but combing them leaves even less time for anything outside of a few to be fleshed out.

On the plus side, the film has enough action and crazy martial arts sequences to satiate any kung fu fans’ hunger. In the flash backs, our heroes settle their differences with a solid amount of fist-to-cuffs and in the “present” sequences, the sons have to team up to fight ridiculously gimmicky villains and their assassination weapons. The latter leads to one of the most epic decapitations I have ever seen on film let alone in a kung fu film. Oh Chang Cheh, you always did know how to jack the violence of your films to the next level.

“Ten Tigers” is still a massively entertaining film and despite flaws in trying to jam two movies worth of material into one and rather broad stroke characters, the charming cast and vicious fight sequences fill in for many of those issues. As a Shaw Brothers fan, it’s a great film for my collection even if I’m occasionally dumbfounded by the lacking cohesion of the film.