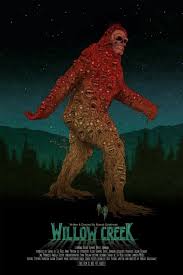 Being another found footage/handheld filmed flick in the wild, “Willow Creek” is a movie that will set off alarms with moviegoers real quick with comparisons with “The Blair Witch Project.”  Both feature aspiring filmmakers trying to capture proof of a local legend out in the wilderness so of course the comparisons will be made. The real question though is, is “Willow Creek” as good as “The Blair Witch Project” or even better. With director Bobcat Goldthwait in the director’s chair, this film marks unfamiliar territory for the well-known comedian, with previous efforts such as “World’s Greatest Dad” and “God Bless America.” “Willow Creek” is a very low budget film with minimal cast and crew so there isn’t much in the special effects department to look forward to. Much like “The Blair Witch Project,” it relies more on cast performance and inciting fear through showing almost nothing at all.

While “Willow Creek” is similar to “The Blair Witch Project” and other related films, it does differ as well in many ways. There are only two actual cast members in the film as the rest are all actual local residents that live around Willow Creek.  It sort of gives it that authenticity, making the documentary type footage seem more real than it really is. To add on to this, very little of the actual film is scripted, allowing the two actors to use improvisation to fill in the gaps. The first half or so of the film is set in the town of Willow Creek. The basic interviews with townsfolk and exploration of the town occurs. But it’s never a Bobcat Goldthwait film if there isn’t any comedy. We are treated to our main character’s sarcastic sense of humor plus the awkwardness of the small town mentality. Our filmmakers visit various attractions in the town such as a restaurant that is home to the Bigfoot burger, a Bigfoot museum, and a Bigfoot expert.  The film however goes from comedy to horror as the duo find their way to the forest and camp out in hopes of finding their Bigfoot.

The transition from comedy to horror is pretty smooth and this is where the film takes a huge turn. We now go from the town to the woods as the couple go to the campsite where the famous Bigfoot footage was filmed. They are alone and isolated with no means of communication or refuge. What seems like a simple trip to gather evidence and footage slowly quickly turns into a frightening nightmare that threatens to end their lives. At this point of the film, Goldthwait opts in to show absolutely as little as possible to leave the events up to the imagination of the viewer. What is most notable is one very impressive long take that is done flawlessly with no moment of mistake or fault by both the crew and the actors. This however has its pros and cons. The scene is very impressive and captures the fear and emotion of our two leads very well but on the other end it becomes at least a little bit too drawn out. Viewers may find themselves yawning after awhile as the scene gets a little tedious and repetitive. I know that this wasn’t the case for everyone at Fantasia this year but personally I felt that it could have been shortened a little.

At the end of the film we are treated to a climax that is simple yet we are still left to make up our own minds. Viewers who have been paying attention might find themselves making links to information known previous to going in the woods. Overall, as a person who is not a fan of “The Blair Witch Project,” I feel like “Willow Creek” shares some of its cons but is mostly a better film with more entertainment value. It is a true genre film and has its mix of comedy and horror blend perfectly. Bobcat Goldthwait may be known more for his black comedy, but he is definitely welcome in the horror genre.

Written By Elise Holmes
of
Ramblings Of A Deadite
Posted by DarkReif
Email ThisBlogThis!Share to TwitterShare to FacebookShare to Pinterest
Labels: Comedy, Horror