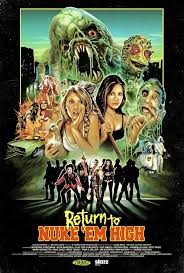 Ahh Troma. The film distribution and production company where debauchery, nudity, gratuitous violence and musical numbers all go hand in hand. Troma has released a lot of movies but nothing beats the heyday of the 80s and the 90s with classics like “The Toxic Avenger,” “Tromeo and Juliet,” and “Terror Firmer.” Now it seems like Troma is revisiting those days with a late sequel, “Return to Nuke ‘Em High.” Yet, those who have seen “Kill Bill” would be familiar with how this film rolls out as it’s only “Volume 1” with “Volume 2” still in the works. The “Class of Nuke ‘Em High” films are very beloved by Troma fans, being a huge favorite delivering on all fronts of what Troma is known for. But the questions remains, can they do it again? Well so far the answer seems to be yes.

“Return to Nuke ‘Em High (Volume 1)” is exactly that; a return to the school that was once condemned thanks to radiation. The school is open once again. Students have to be scanned before entering and the now defunct nuclear power plant is taken over by a health food company. Of course, it’s not Nuke ‘Em High without some radiation! The irresponsible food company who is more concerned with profits than contamination gets their junk in the school cafeteria where it’s eaten by some unsuspecting students, hence we are back in Nuke ‘Em High again. The film itself follows the new rich girl, Lauren, and her encounter with another student that runs a blog against the food company, Chrissy, who also seems to be questioning her sexuality. But it’s also not a "Class of Nuke ‘Em High" without the Cretins! A staple of the franchise, the Cretins are back but probably not the way you’d expect. They are a product of the contaminated tacos that make their way into the school cafeteria.

“Return” starts out with a bang, with some sex and gore that is all very familiar with Troma, setting the tone for the rest of the film. You have your occasional farting, overacting, nudity, debauchery, violence, musical numbers, violence, Lloyd Kaufman, low budget effects, and just plain weird, random, and ridiculous. Well, that just so happens to be a recipe for an entertaining popcorn Troma flick when executed properly which this one mostly is. What really makes the film work is the humor that comes from our two leads and the Cretins. I am very much a fan of the choice of wardrobe and makeup for the Cretins, which perfectly catches the feel of the ones from the original yet also have their own twist. One of the things that I enjoyed the most about “Return to Nuke ‘Em High” is the music. I’ve always been a fan of Troma’s soundtracks and this film is no exception. The film is also unpredictable since you never know what to expect in this film, as it doesn’t seem to follow an exact plot line. But it’s a Troma film so who cares? It actually kind of adds to the film.

Being a film that is actually more like half of one, I can’t say that I’m a fan of the “Volume 1” and “Volume 2” format. The end of “Volume 1” is a little sudden, and I didn’t think it was even ending by the time it rolled around. The poster for the film is really not for “Volume 1,” but for both Volumes so you’ll notice that there are images on it that don’t occur in “Volume 1” at all. Maybe I would have been more of a fan of the idea if I liked the ending more, but in retrospect it isn’t terrible. It’s just not anything exciting. Either way, “Return to Nuke ‘Em High Volume 2” has a lot to deliver with what the film’s poster promises, which makes the wait ever so long! Troma is back to their old selves again so at least we all know that there is more to come.

Written By Elise Holmes
of
Ramblings Of A Deadite
Posted by DarkReif at 3:35 PM