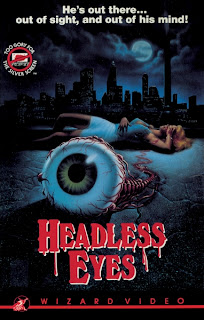 
Taking a trip to the video store as a child was always a treat as my family allowed each of us kids to pick out one glorious film to help us pass the time. During these trips I was always drawn to the horror film section as the tapes in this genre generally had the most “eye popping” (sorry for the pun) cover artwork. Out of these films in the horror section, “Headless Eyes” was one that always grabbed my attention first with its graphic and stellar poster spread across a ‘big box’ with a store made, type writer sticker warning potential renters that they “Must be 18 to rent”. With this warning on the tape I knew my parents would never go for letting me rent the damn thing but it’s eye piercing box artwork burned its way into my retinas and I knew one day I would watch this 70s exploitation horror flick that no doubt would never match the goodness the poster artwork promised. 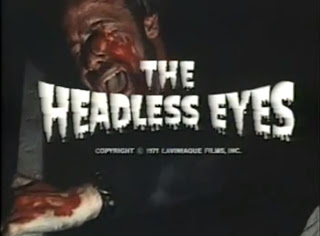 Despite the box artwork claiming “too gory for the silver screen”, in fact the film was given a small theatrical running in the early 70s with a self-imposed “X” rating (though it was never rated by the MPAA). The film quickly disappeared from grindhouse cinemas only to reappear on home video in the 80s thanks to Charles Band’s shady Wizard Video home entertainment label. In fact if  it weren’t for his ingenious cover artwork design the film probably would have faded into oblivion as, like I suspected, the film isn’t nearly as clever or ‘good’ as it’s glorious cover artwork and pales in comparison to the plethora of other exploitation films that filled grindhouse cinemas at the time of its release. 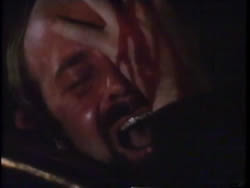 In order to the pay the rent, a starving artist in New York City attempts to rob an apartment. While in the process, the female resident gouges his eye out with her tea spoon (!!!). He somehow crawls away, eye gorily hanging from his socket by a nerve strand. This experience drives him insane and soon he’s tormented by visions of disembodied eyeballs and takes his frustration out by killing women and collecting their eyeballs in his freezer. 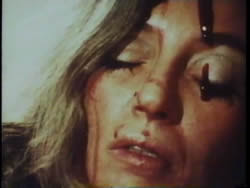 This film is the brainchild of writer/director Kent Bateman (father of Jason and Justine Bateman) and it’s obvious he is out to make a quick buck as opposed to an entertaining exploitation horror flick and he should have took notes from genre favorites Hershell Gorden Lewis (“Blood Feast”) or David E. Durston (“I Drink Your Blood”). Despite the short running time the film just lacks spunk and failed to draw me in as a viewer, no matter how many fake eyeballs Bateman tries to throw at the screen. Despite his lack of enthusiasm behind the camera he is able to capture the griminess of New York much like the decade later, and far better, exploitation horror film “Maniac”. Actually the tone of “Headless Eyes” actually reminds me of “Maniac” but unlike the brilliant William Lustig, Bateman isn’t able to make a captivating lunatic and without that essential element the film wallows in its own fecal material and quickly loses the interest of the viewers. The grating musical score didn't help matters either. 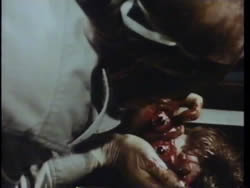 After finally seeing “Headless Eyes” after all these years of patiently waiting, it’s easy to see why it was so quickly forgotten on its initial theatrical release as it plain and simple sucks compared to other films of the same ilk released at the same time. If it weren’t for its VHS release popularized by the amazing poster artwork then it would have faded into oblivion for good. Its VHS release became a collector’s item for fans of the “big box” and Charles Band finally unleashed  it on DVD part of his “Full Moon’s Grindhouse Collection” line. Much like other films in the collection, the DVD is simply a VHS transfer but it’s fitting for a film this bad in nature. Forgiving exploitation film fans and people feeling VHS nostalgia might  want to check this out or else they would be better off purchasing much better films made in the similar mold, like "Maniac."