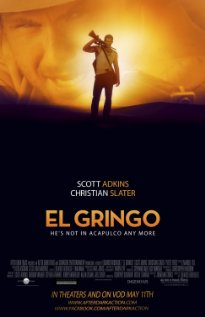 There always comes that time in any cult film fan's life when he or she, must debate at whether a film is 'good.' It's an oddly well versed term that often doesn't describe the feelings generated for a person by a specific film. This is the debate I've held for at least a week since I caught "El Gringo". The film is enjoyable as hell with its over the top style, charming lead in Scott Adkins, and rather goofy concept...but its still an ill conceived and often hollow watching experience. So is the film 'good?' The answer is much more complicated than a yes or no, because it is both in the case of this After Dark Action release.

An unnamed man (Adkins) finds himself on the run when his fellow cops are gunned down in a set up. He survives the ambush, takes the money used for the drug buy, and hightails it to Mexico to see if he can make it to his dream vacation. Unfortunately, he stumbles into a run down town where the residents are intent on keeping him there with their corruption and a fellow cop West (Slater) is hunting him down.

"El Gringo" feels like a B-grade action film that went straight to home video. I guess that's fitting since its brief and limited theatrical run was very limited in both those areas. It doesn't help that the film is built on some very shaky foundations either. The plot runs at a very cliche 'by the numbers' pacing and our characters are about as deep as the kiddy pool for toddlers. Half the time I wasn't sure if I was supposed to be invested in either the plot or characters or if I was supposed to laugh at the ridiculousness of their two-dimensional build. Beyond our hero, I couldn't care less for its weak romantic build or the police betrayal whodunnit back story as the motive for all of this action. Not even a normally fun Christian Slater saved that plot line. It was like piecing together a very run of the mill action script that failed to really invest its viewers.

On the other hand, this was one of those movies that fucking kicked its way to being enjoyable with charm and style. I use the term kicked, because a major one of those aspects happens to be leading action star Mr. Adkins. The guy is somewhat of a cult icon already having worked with classics like Jean Claude ("Assassination Games"), as a villain ("Undisputed II"), and on his own ("Ninja") and a film like this certainly carries the screen presence he brings to the table. It would have been nice to see some of the odd running jokes really take off in the film including his somewhat gained dog partner which could have been gold in a film like this, but seems underused. Despite some missed opportunities with the protagonist and his lacking depth, Adkins is perhaps the biggest selling point.

Another solid point is the action of course. If it wasn't, a film like this would be a massive waste of time. Adkins is a stellar martial artist and the director utilizes some Guy Ritchie inspired style to really make the most out of these sequences. Whether our hero is beating in heads to get his satchel of money back on the street, having a fist fight with a cowboy in the desert, or double barrel blasting his way out of a trunk...the action is awesome here. The finale is a bit of a let down as our building duel between Adkins and Slater seems to dwindle out rather quickly, but beyond that its solid.

"El Gringo" is not a great film, by any use of the term. It's even a stretch to call it good. What the film does succeed at is entertaining. The director's quirky style of intense angles and odd moments brings out the charm for the intense action and strong use of Scott Adkins charm. It's not a film for those who critique harshly as it will be hard to get over the film's obviously cliche and poorly written flaws, but enjoy it for its B-grade action awesomeness and its worth the watch.

Written By Matt Reifschneider
Posted by DarkReif at 11:20 AM