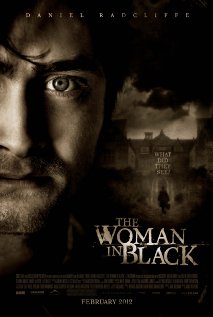 Once again I find myself in a conundrum. This new version of "The Woman In Black" (originally a book, then a play, then a movie, now a remake from Hammer studios) is a wonderfully charming old school chiller. I love it for its decidedly classic approach to the period story, yet felt completely uninspired by it at the same time. It leaves me torn on this surprisingly successful film as I came away from it feeling unfulfilled with it as a whole, but loving so many aspects about it. Thusly the film ends up with a '3' on the rating scale as it doesn't quite invoke the scares I wanted it to while doing all the right things.

Mr. Kipps (Radcliffe), whose life has been torn from the loss of his wife in childbirth to his now four year old son, has been given a last chance at his job. He is sent to a remote village in the outskirts of Britain to work his way through a mountain of paper work on an empty house that's supposedly haunted. His job on the line, he pushes through the creepy house and the isolating tides to finish the work. When he begins to experience odd things, seeing a woman in black while children of the town come to mysterious deaths, Mr. Kipps must decide whether his work is truly as important as helping the terrified town folk with their deadly mystery.

I'll be the first to admit, "The Woman In Black" is a beautiful film. The wonderful artistic designs of the massively creepy house and the general foggy atmosphere of the film cakes on an almost painting like look to the film of dreary colors and period set dialogue. This is matched with some potent ghost scares that work on that look for the film in spades as it takes time to build up tensions for the jumps. It's not a fast paced film by any means, but with such a beautiful design I was more than willing to take it all in with its pacing.

For the most part, I did enjoy the film beyond its build. It's decidedly old school in it's structure and simplicity and I admire the approach that Hammer and company took. It just didn't always work the way it seem intended. Firstly, Radcliffe seems a tad young for the role. He handled it well (the audience member that screamed "I love you Harry Potter" when he first appeared, obviously wasn't sold on his role) and worked with ease in many of the longer scenes that were meant to build tension, but I wasn't sold on him being a forlorn lost soul.

It also doesn't help that often enough the scares felt a bit forced at times with lots of loud sounds and boo moments to get the audience to jump that betrayed the creepiness of the atmosphere. It's as if the film itself was trapped in a purgatory between being a mainstream ghost film and one that desperately wanted to be an old school artistic film. Almost like a full on period version of "Dead Silence" at times.

For those willing to overlook the obvious catering to a younger audience with its casting and forced jump scares, there is still a lot of admire about "The Woman In Black". It's got great caked on atmosphere and wonderfully built tension with its designs and many of the longer shots did have me holding my breath in suspense. Unfortunately, just like the bogs that its haunted house resides in - at high tide its simply watered down and too simple for its own good - lacking the ground to really get its haunted house concept running at full speed.

Written By Matt Reifschneider
Posted by DarkReif at 9:31 PM