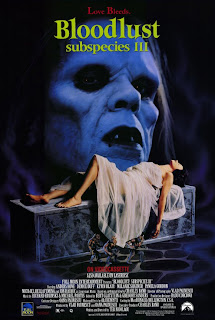 Why, oh why is the second of two back-to-back made sequels always the worst of the two?! Seriously, name me one instance where the second is better (and no, the "Lord of the Rings" trilogy doesn't count as they were all filmed at once). "Matrix Revolutions" was worse than "Matrix Revelations", "Trancers 5" is worse than "Trancers 4" and of course "Subspecies III" is worse than "Subspecies II". There just wasn't enough plot to pad this entry out so what we get is a dull "Beauty and the Beast" clone with blood suckers.

Opening right after the second film, our 'mummy' resurrects our drooling blood fiend Radu and now he miraculously decides that he loves our crying heroin Michelle Morgan (Denice Duff again) despite trying to kill her off brutally for a majority of "Subspecies II". Michelle's sister and her boyfriend continue, unsuccessfully, to rescue her even with the help of a dimwitted inspector and a mercenary CIA operative.

I praised director Ted Nicolaou in my review for "Subspecies II" for tightening up the pace but here he fumbles the ball as the film meanders along with it's tragic 'love' story, and I use the term 'love' in the loosest form possible. He attempts to make a tragic "Beauty in the Beast" clone with vampires yet how can a love story bloom when our heroin despises the vampire beast so much. I mean this fucker brutally killed all here friends and even attempted to kill here so no love is going to bloom EVER!

Because the plot doesn't have anywhere to go our heroin Michelle mostly stands around crying AGAIN while Radu attempts to teach his crush how to thrive as a vampire. He even starts to feel sorry for the atrocities he committed in the previous films... which I call bullshit! The only part of the film that got me involved is the introduction of a peculiar CIA operative who is a gung-ho mercenary complete with machine guns to take the blood suckers on, which just makes it more hilarious when he is quickly done in with a flying knife.

Like most back-to-back made sequels there just wasn't enough plot to pad out another film. Unlike "Subspecies II", the plot here is slow and plodding with a long title and flashback sequence in order to pad it out to a feature film length. The production values are on par with the last film hence they are great by Full Moon standards but overall there isn't enough going on in this sequel to warrant it a 'must see'. Though it would have been fitting to stop here to round out a trilogy, Full Moon unwisely decided to make one more sequel but I advise stopping here.

Written By Eric Reifschneider
Posted by Cronosmantas at 8:46 PM