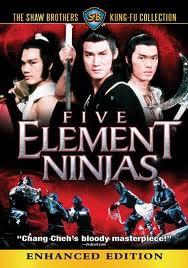 To be perfectly honest, my favorite films from the Shaw Brothers are the Venom films from Chang Cheh. "5 Deadly Venoms" is my favorite king fu film of all time and everything that can be associated with it instantly has my attention. Enter "Five Element Ninjas". Definitely a gimmicky kung fu film, this little vengeance story is crafted around the mysteriousness and lethality of ninjistu while using it in the classic Chinese kung fu format. It's pretty formulaic in its delivery (what of Chang Cheh's films aren't to some degree?), but its hard to deny how fun and brutal this film is. One that makes it with charm despite its ridiculous concept.

When two rival kung fu schools take it to the next level, the one school desperately reaches out to Japan for help. When their hired samurai fails to make the cut (no pun intended), he sends word back to have a clan of ninja come back for revenge. After these ninja assassins decimate the school, our young survivor hero must learn the deadly art of ninjistu, band together with a few new recruits, and take it to the themed ninja who killed his family.

To say that "Five Element Ninjas" is a film based on a gimmick doesn't properly convey just how gimmicky this film is. A clan of ninja all based on five elements (wood, water, metal, earth, and fire) who have to be defeated by a well trained group of kung fu brothers? It also doesn't convey just how awesome it is. You get to see a whole lot of ninja assassin techniques (albeit sometimes silly like dressing like trees) and of course lots of people kicking each other's asses. The fighting and choreography most certainly highlight this film with the finale being the best (the ax fighting against the Metal ninja is phenomenal). It's a gimmick, but damn if its not entertaining.

Beyond that, "Five Element Ninjas" is rather mediocre. The characters are rather basic, the villain is decent enough, and the acting is good enough, but overall its your basic Shaw Brothers kind of film. Not a whole lot in plot twists and progression to give it unique flavor here, but when you have gimmicks and choreography this much fun who needs that stuff?

Shaw Brothers fans will certainly love "Five Element Ninjas" for its fun premise and great choreography. Film fans may criticize it for being formulaic and mediocre in writing. Luckily, I'm more former along with the latter and this film earns its way into one of my favorites for the studio.

Written By Matt Reifschneider
Posted by DarkReif at 5:06 PM