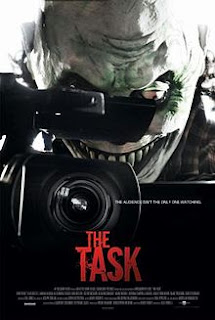 After Dark films has a knack for covering a wide range of films. By wide range, I mean wide range of quality that goes from impressively awesome to abysmal crap. I've even given up trying to guess which ones are which. This is why I tried to go into "The Task" with blank expectations. "Seconds Apart" was surprisingly effective, but "Area 51" was horrifyingly terrible. Where would "The Task" fit? As it would turn out, it fits right about in-between.

A group of cliche people are chosen to be part of a new reality TV horror show entitled 'The Task'. The group of producers and tech guys are anxiously awaiting their shot at making it big, while these contestants are put in fear's path by having to stay the night in a supposedly haunted abandoned prison with a horrible history. The producers have lined up a series of frightening tasks for these contestants, but the biggest trick of them all just might be that the real ghosts of the prison have a few tasks of their own.

So basically, "The Task" is a modern twist on "The House On Haunted Hill"...expect not quite as good as the remake even was (which isn't saying much). Group of (insert connected young group of people here) are killed off by the ghosts of an abandoned (insert terrifying place here) while thinking its part of a game. Familiar eh? Even the reality show twist doesn't quite save it from seeming cliche. It has its moments of fun ridiculousness like the asinine contestants, but more often than not its just simply run of the mill.

So if the characters are gimmicky and the story rather cliche, it better have some solid scares to sell it. Pfft. You wish. "The Task" has remarkably ineffective scares and kill sequences. Our shirtless and mustached villain rarely makes one cringe and our characters are knocked off in rather bland ways. Shank? No shit. Gas chamber? Wow. That's original. I definitely could have used a bit more of an intense take on the horror aspects of the film.

In the end "The Task" isn't horrible, but it rarely stands out against the usual horror shrapnel that makes its way to home release anymore. It has a few moments here and there...not enough to really make it one of the After Dark Original highlights though.

Written By Matt Reifschneider
Posted by DarkReif at 11:46 PM