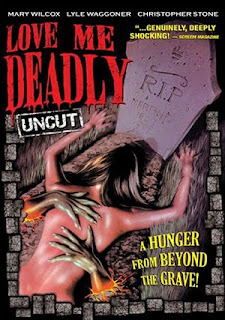 Necrophilia... now there's a subject that's even too taboo for the horror genre to tackle too often. For those that don't know, the basic definition is "sex with a corpse". As one can see the word doesn't spell 'box office block buster' with such a grim and disgusting definition and most horror films that deal with the subject, like "Nekromantik", play it for all out gross-out effect. "Love Me Deadly" however is far more subtle with the subject matter, delving into a person going through self-discovery of their sickening attraction and ends up being far better than one would expect with such a plot device.

A beautiful blond (played by Mary Wilcox) with daddy issues is making the rounds at funeral homes, attending funerals of young to middle aged men in order to get some alone time with the deceased to get her freak on. A macabre funeral director takes notice in here multiple appearances and invites here to join a group who share the same desires. Struggling with her fetish, she can't break her attraction despite falling in love and marrying. Will her husband find out about her ghoulish past time activities?

Though it has disturbing scenes, writer/director Jacques Lacerte handles the subject matter with maturity and doesn't go the route of complete gross-out just for the effect of making audiences throw up in their barf buckets. The plot is engrossing as we follow this beauty and here self-discovery of her grotesque deserves. Actress Mary Wilcox effectively establishes the war within herself, knowing the act is wrong but can't help but caving in. There is also an interesting subplot which revolves around our macabre funeral home director that accosts gay gigolos only to kill them to have his way with them after death.

The film does tread into some unintentional laughter territory as our Necro Blond does lead several of here friends and family members into the funeral home only to have them killed off. Seriously, it's like three or four times. I'm surprised the funeral home director just didn't have her killed off in order to save on headache of killing people that discovered his secret coven of necrophiliacs.

For a low budget drive-in flick, director Jacques Lacerte could have easily taken the film into gross-out territory in order to sell more tickets and I applaud him for taking the film more seriously. Still the sick premises does have a number of disturbing scenes but the film overall is a slow burner, taking it's time to build up to a memorable ending. Don't expect any jump scares or sheer terror, "Love Me Deadly" is a slow builder of creepy and off-beat atmosphere and definitely worth a watch for fans of horror films that lie a little outside the box, or would a better term be casket?

Written By Eric Reifschneider
Posted by Cronosmantas at 12:01 PM