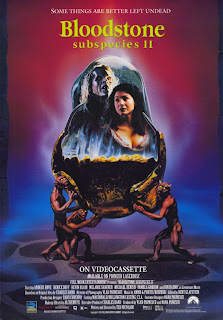 "Subspecies II" was part of an experiment Full Moon Entertainment conducted in which they made back-to-back sequels to their most successful franchises ("Subspecies", "Puppet Master" and "Trancers") and I've stated in other reviews that I DESPISE when production companies take this route. However I do have to hand it to Full Moon as they did craft some pretty entertaining sequels with this process (sans "Trancers 4" & "5") that actually puts high budget studios to shame that also practice this back-to-back sequel making technique (cough, cough "Matrix" and "Pirates of the Caribbean"). "Subspecies II" not only ends up being one of Full Moon's better sequels, but it actually matches the original with its low budget vampire sucking goodness.

Picking up right after the first film ended, we open with our ghoulish vampire Radu (Anders Hove returning) being resurrected by our pointless mini demons known as the subspecies (that somehow serve as the title of the series). Radu begins with killing his metrosexual brother in whilst sleeping (which means they couldn't get the actor back so they conveniently kill him off). Before he can kill the newly transformed Michelle, the sun rises so she awakes, steals the 'bloodstone' (which looks completely different) so know he must chase our virginal vampire down with the aid of his mummified hag mother.

This sequel outdoes it's guilty pleasure predecessor in the plot department as the pacing is much quicker. This surprised the shit out of me considering this was shot congruently with "Subspecies III" and with a single plot line expanding two films I expected far more padding. One aspect that the film fairs worse in is the dialogue department as it is far more hokey and silly. Director Ted Nicolaou does have a keen eye for style as the film has a nice polished look about it despite being made for the direct-to-video department. Nicolaou's use of shadows are also admirable and makes the film captivating from a technical standpoint.

The main problem for me is the main character of Michelle as she is far more wishy-washy. Her character in the first film (played by Laura Tate) was a strong, determined women. Here the character is just a needy, emotional mess that spends most of the film sobbing and crying. Her character also ends up being reactionary protagonist as she does nothing to move the plot along herself, only reacting to actions on the screen created by the antagonist character of Radu. Seriously Radu ends up being more of a main character than our 'heroin', if she would qualify as that.

The continuity as expected is complete bullcrap. Not only is our character of Michelle act completely different, she now has LONG hair even though the film takes place within mere moments of the original. The bloodstone itself has also gotten a complete makeover, though it does look far more lavish than the cracker jack toy of the original film. Seriously there's enough continuity errors here to make one's head explode.

A plethora of new characters are added into the "Subspecies" universe (perhaps 'universe' is too grandiose a term to describe such a silly low budget franchise) including but not limited to a our 'heroines' professor (where was he in the first film?), her sister (played by William Shatner's daughter... the horror!) and her preverbal love interest Kevin Spirtas, who looks like he just walked off the set of a soap opera. The new character that takes the blood pie is Mummy, Radu's hideous mother. Yes this character is a wee silly but her dysfunctional relationship with her son does provide for a few unintentional laughs.

Despite its obvious low budget short comings, "Subspecies II", compared to the original, is one of the more stronger sequels I've seen as it matches the original. Though it may be weaker in some angles (dialogue), director Ted Nicolaou makes up for it in other aspects (pacing). Overall this is a very satisfying sequel and one of the overall strongest films that the Full Moon factory pumped out in its early heyday. Can they keep it up in "Bloodlust: Subspecies III"? Well it's the second of back-to-back sequels so I'll let you draw your own conclusions.

Written By Eric Reifschneider
Posted by Cronosmantas at 4:40 PM