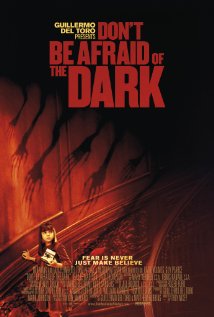 Its something of a quirk that the original made for TV film "Don't Be Afraid Of The Dark" was as good as it was and earned its cult horror merit after time. What makes it even more quirky is that Guillermo Del Toro would find such an influence from it as a child and that it would affect him enough to pursue remaking the damn thing and releasing it as a mainstream horror film in the US. For those familiar with the atmospheric original one, the remake is a bit of a let down despite some very interesting stylistic changes. It certainly does build some solid scares with great sets and artistic choices, but its rather week script and odd cast don't do it any favors.

Sally (Madison) has just been sent to live with her father (Pearce) and his new girlfriend (Holmes) as they renovate a massive ancient house. Although the tensions run high as Sally dislikes the new girlfriend and her father is much too busy with work, she soon discovers a buried hidden room of the house. There she unwittingly unleashes an ancient mob of small creatures whom at first seem harmless, but begin to show their true motives towards Sally.

The positives of "Don't Be Afraid Of The Dark" first: this is a beautiful film. It's got Del Toro written all over it as a producer with its amazing settings (including the massively beautiful and creepy house and the amazing garden) and its high production values. Even first time mainstream film director Nixey throws in enough charm with some great shots and use of small movements to build tension and fear. The special effects are top notch with the monstrous little creatures that scuttle around and earn some pretty legit scares being a high light of the film.

The problems that arise from "Don't Be Afraid Of The Dark" mostly concern its script and how it works. It rushes through the character development to work on plot progression and it leaves us unconnected with our heroine and her guardians which in turn makes us uninterested in how things turn out. The film also fails to pace properly as it rushes through the opening and then stutters in its cliche "no one believes me until things start to go real ugly" before kicking forward to an intense climax.

"Don't Be Afraid Of The Dark" just happens to be a mixed bag of tricks. It's beautiful to look at, its modernized well in changing the lead character to a child, and its got some awesome scare moments. It also happens to feel completely detached from its audience and Nixey seems inept at getting actors to do their thing (Pearce looks like he's in autopilot - which considering how good he is can be a massive disappointment). Fans of the original should certainly take a gander at how such a simple story can be fleshed out in modern times, but beyond that its more or less just a hit or miss horror film.

BONUS RANT: This film is rated 'R' for violence and terror. It has some moments where it certainly pushes the limits (the tooth chisel in the opening sequence or the rope on the leg at the end), but...really? I've seen movies with PG-13 that are far scarier and more violent and most of the scenes in here are brief. Guess that's why I don't rate movies.

Written By Matt Reifschneider
Posted by DarkReif at 7:52 PM