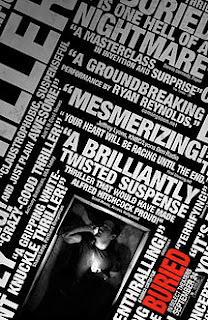 Color me skeptical, but spending an hour and a half with Ryan Reynolds in only a coffin seemed like a gimmick that I wasn't ready to jump into before watching "Buried". I saw "Green Lantern" and that made me want to bury Reynolds enough. He couldn't possibly carry a film on his shoulders though...right?

An Iraq bound truck driver Paul (Reynolds) wakes up buried alive in a wooden coffin. After an attack on his convoy of materials, he is being held for ransom. With only a handful of items left for him in his pocket (including a cell phone), Paul has to find a way to escape his doom before oxygen runs out...

Even though Reynolds is the only actor featured on screen in the film, it's not him that carries this film. It's director Cortes. Cortes and his insane ability to glue me to the damn screen for 90 minutes with just a coffin, the charm of Reynolds, and odd lighting elements. With the limited dialogue (the character does seem to remember a ton of phone numbers to keep that at a maximum) and only lighting from elements within the coffin - a blue cell phone screen, a yellow lighter flame, and green glow sticks - "Buried" works pure magic to keep the intensity up. Cortes uses all kinds of Hitchcockian tricks with the use of dark, silence, camera angles, long moments of nothing, and bursts of character insanity to keep this film moving. Not to be overly dramatic, but its like watching art unfold on screen as Cortes throws everything but the conventional to make this film work. It's beautiful.

Even Reynolds can't fuck this one up. His charisma (and limited wise cracks) plays to his benefit as he earns his merit with the limited dialogue and plot twists. Occasionally the film can be a bit forced in its progressions including a snake scene that seems to pop out of the blue a bit, but Reynolds delivers when its needed and he rarely deviates from the style to make it seem forced. A move that he accomplishes with surprising ease. Who knew Reynolds could hold a film like this?

If there is one thriller that earns its Hitchcock references, it's "Buried". Intense, provocative in character work, and stunningly clever with its "gimmick" this film wows its way into my 'must see' modern cult film list. Now I wish that I hadn't waited so long to watch it thinking it was more gimmick than talent. Cortes is a director to watch from this point on.

Written By Matt Reifschneider
Posted by DarkReif at 10:03 PM