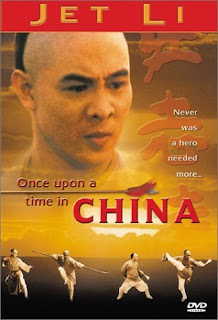 The film follows the life of Wong Fei Hong (portrayed by Jet Li), a historical legend in China for his renowned skill in martial arts. This historical setting takes place in the late 1800s with the invasion of the British and other foreigners. Fei Hong must take on local gangs, corrupt government officials and the "foreign devils" in order to preserve the cultural heritage of China.

This film marks the 99th time a film about the historical figure Wong Fei Hong... and that's quite a feat. Though I haven't seen even a fraction of the films based on him I would be confident to say that "Once Upon a Time in China" has to be one of the best, if not the best, film to portray the character even if the historical context of the film may take plenty of leeway with his story. Jet Li is just captivating in the lead role with his martial arts grace and his character is punctuated to greater extent by colorful secondary characters, which includes a stuttering western educated dork and hefty merchant. The addition of a character oddly named "Aunt 13" adds a shy and cute romantic interest which beautifully contrasts against the chaotic and violent political backdrop.

The direction by renowned director Tsui Hark is just dripping with cinematic greatness. He was one of the first Hong Kong directors to really take interest in good dialogue and cinematic style in order to tell a captivating story as opposed to just focusing on martial arts action sequences... but don't let that fool you into thinking the martial arts fights sequences are lacking. He loads the film up with some of the best fight sequences to ever be found in the the martial arts genre by mixing both practical and wire work. He films these sequences to tremendous skill and dexterity by always placing the camera in alluring angles to get the most out of every fight sequence.

If the film would be guilty of anything it would for being overly ambitious. The script tries to tackle too many aspects at once making the story overly complex and confusing at moments, especially watching the uncut Hong Kong version in its original Chinese Language with English subtitles. Hark tries to convey that Hung is trying to save his country from "foreign devils" as his beloved homeland was decaying from corrupt officials. All this introduces too many characters that can make it hard for the audience to follow. The story of Hung's beef with a rival gang, on the other side of the spectrum, isn't elaborated on enough, with the motivations of each side flimsy at best.

Even with its faults of being too ambitions, "Once Upon a Time in China" ends up being the best Asian martial arts film I have ever seen. It takes the "martial arts" film to the next level by combining jaw-dropping action sequences with entrancing film-making and dialogue to make a truly great cinematic experience. This new style to the martial arts film resonated with Chinese audiences who were sick of slap-stick comedy and art-house approaches to the genre as the film was a huge success, paving the way to five entertaining sequels.

Written By Eric Reifschneider
Posted by Cronosmantas at 11:14 AM