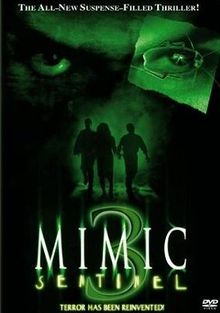 "Mimic" was a surprisingly awesome science fiction horror crossbreed and its eventual sequel was a rather...um...humdrum affair, but what can one expect from its third entry of the franchise? Well, its a film buried as a straight to DVD release whose budget constrains the film from reaching the heights it might have reached. Luckily, director/writer JT Petty makes some clever decisions for the film to give it enough of a unique spin that it holds itself far above simply being a cash in film.

Marvin (Geary), one of the few surviving children of the disease that decimated the city in the first "Mimic", might be stuck in his allergy free room, but that doesn't prevent him from trying to live life outside of the walls through his camera and pictures. His little sister (Dziena) helps out in his quest (including introducing him to the beautiful neighbor (Mader) from across the ally), but when a mysterious new figure appears and neighbors begin to disappear Marvin and his friends must figure out how the Judas breed might be involved.

Coming across as a "Rear Window" knock-off playing in the "Mimic" universe, the surprising artistic value of "Sentinel" overshadows many of its budgetary and execution restraints. We are lead to connect with the surprisingly charming lead actor and his plight against his own weaknesses and the threats of an outside world while director Petty does some admirably clever things visually to work the budget to full effect. Even though much of the supporting cast is sub-par in their roles (the sister annoys more than conveys the rebellious nature), it's easily outdone with its knack for style and suspense.

One aspect many seem discouraged with is the lacking special effects. Considering its a film about giant man eating cockroaches, the film downplays the special effects. It's a ballsy move. "Sentinel" and Petty work it pretty brilliantly though with solid enough atmosphere and tension. The use of shadows and the claustrophobia to take the focus off of the effects is clever and useful considering the low budget. Just look at the poor CGI and suit effects at the end and tell me it wasn't a good idea to move away from that. Petty does make some great scenes with little effects like the refrigerator scene with the blinking light of the door opening and closing and I appreciate the film's sense of knowing what they had to work with.

Being honest with you, I was relatively surprised with the quality of "Sentinel". It makes clever choices with its direction and use of connections to the previous films and the style certainly benefits the film. "Sentinel" does suffer from its rather unoriginal scripting formula, poor acting, and low budget - but considering what it might have been without the style - just color me impressed.