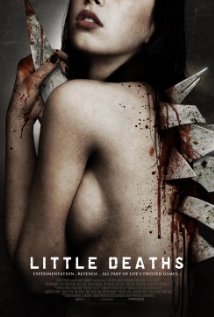 Sometimes underground word of mouth can be deceiving. Fans of a certain film will talk it up to death claiming it the best thing you haven't seen or horrendously underrated. It gets to a point where the film can't live up to its hype. That's how "Little Deaths" was. The word of mouth talked up the film so much that its quirky artistic style simply couldn't live up to it. It didn't help that this anthology horror film certainly seemed to carry an air of "too artsy for its own good" to go with the disappointing hype, leaving a film that just seemed like an attempt at being edgy without the actual weight to do so.

Story One: A higher end couple takes pity on a homeless woman in good neighborly sense. They offer to feed her, bathe her, and house her for one night in the name of doing their fellow man a little good. Too bad they have other intentions with their house guest that aren't so decent. Story Two: A couple of down and out drug dealers stumble on the newest thing. A little pill that makes one feel completely whole. Unfortunately, the makers of this new drug have disturbing ways of getting its expensive raw materials and our down and out female protagonist is going to see the results first hand. Story Three: A young man and woman have had trouble with their relationship as of a late. They just can't seem to get onto the same page with where they are at. With a new little game to add pizzazz to their sex life though, the couple may push themselves to all new areas...not all of which are healthy.

Basically, "Little Deaths" is three separate short films attached to one another based on the basic theme of 'fucked up people doing fucked up sexual things to other fucked up people'. Not necessarily a blockbuster kind of theme to get a film massive distribution. "Little Deaths" does do it with enough sense of art that it doesn't fall down into exploitation territory (although it comes damn close at times) and completely detaches from its audience which is nice.

Although each of the films do certainly have their own aspects, the threaded style is very similar. The acting is done in a very realistic tone with its gloom color schemes and uber-realistic style of filming. This almost makes the more outrageous elements stand out like sores and makes it flow rather awkwardly. The ending of the first story takes an almost supernatural twist and the entirety of the second drug story seem more like episodes of "Masters Of Horror" with its borderline "twist" tones. This leaves the third story as the highlight as it blends the artistic elements more fluidly with the overall realistic tone of the film.

In the end, the film just failed to suck me in like it should have to sell the concept. The anthology style seems tacked together quickly (and with clever anthology films like "Chillerama" and "Trick R Treat" doing it so well it seems sub par here) and the artistic attempts can be forced. People do seem to really enjoy it - I'm definitely the black sheep of my friends and acquaintances - but "Little Deaths" just couldn't get me into it. When a film focuses on realism, this is the ultimate bad thing and "Little Deaths" falls prey to it.

Written By Matt Reifschneider
Posted by DarkReif at 1:26 PM