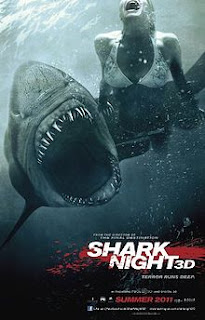 David R Ellis is known for giving us some very "classic" horror gems like "Final Destination 2", "Snakes On A Plane", and "The Final Destination". At times I feel bad for the guy because its obvious that they give him the shittiest scripts at all possible because he can make them mainstream enough to sell them to a large audience. Take his latest crap film "Shark Night" for a prime example. He fought to have the title of the film to be "Untitled 3D Shark Thriller" so its obvious he knew how bad it was and wanted to run with that. Doesn't help it though, as the title he fought for aptly describes how memorable the film actually is. It's about as generic as possible and when it isn't following a formula its worse not better.

A group of college kids get a hankering for some weekend fun when they are invited to the wetlands and some lake fun at their friend Sara (Paxton)'s house. None of them realize quite why Sara has never been back home in the 3 years since she went to college, but the general vibe of the hillbilly like country folk certainly doesn't seem homey. That won't stop them from having fun on the water though. Not until they find out that the lake is shark infested...

The script for "Shark Night" is ridiculously silly. Coming off as a "Jaws" knock off that might have fit better for release in the late 70s/early 80s (even the opening sequence is an obvious "Jaws" moment), this man versus beast flick would have made a much better straight to DVD selection than one that hit theaters. It has atrociously cliche characters, worse dialogue, and a plot progression that rarely makes sense let alone inspires its audience to give into its ridiculous concept.

Granted, one has to admit that Ellis makes use of its horrible script and pushes it to some ridiculous extremes. Although the kill sequences aren't all that unique (here's a clue: people get eaten by sharks!), he does try to make it more interesting than normal by throwing out some outrageous moments. Sharks that leap from the water to devour people, hillbillies with sharpened teeth (?!), and of course plenty of laugh inducing character back stories to go along with the dumbest "twist" of why the sharks are there as possible. If you are looking for some great unintentional laughs than "Shark Night" is full of those.

If you know that this film is from David R Ellis and its about college kids fighting off some hillbilly raised sharks than you should have enough sense not to take it seriously. Doesn't stop the film from being completely idiotic at moments with its gimmicks and poor progressions, but take it with a laugh and you might have fun with it. Otherwise, skip it. Not worth the money.

Written By Matt Reifschneider
Posted by DarkReif at 6:07 PM