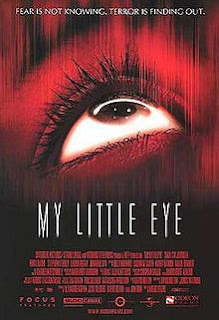 Recently I wrote about how word of mouth can ruin films by building too much hype. Let's look at the other side of that proverbial coin and see how word of mouth can lead one to discover some very underrated films. "My Little Eye" for example. Rumor had it that this little indie Brit thriller was surprisingly effective and (once again) curiosity grabbed me by the hair and dragged me into the film. The verdict? "My Little Eye" is a surprisingly intense little ditty that works its low budget with artistic spin on a rather mundane concept.

Five of your rather cliche reality show personalities have signed up for an intense new internet only show. Untitled and funded by a group who keep it discreet for the sake of "leaked secrets", these unsuspecting contestants are going to each be given one million dollars for living together for six months in a remote location with no connection to the outside world. The only rule: no one leaves. When they start receiving odd packages at their door with only a week left, they begin to suspect that it has become more than just a webcast reality show...one where the winner might not take all.

It's a simple film really and one with a gimmick that doesn't seem original in this day and age. Isolated house with no where to go. Paranoid and confrontational individuals. Suspicious motives and activities. It's a suspense trap that with an effective director and cast should work quite well. Unfortunately, it only has one of those two things. One out of two isn't bad though in this case.

"My Little Eye" succeeds by sheer will and artistic vision from it's director, Marc Evans. It's budget is Mariana Trench low and it's cast (sans a rather odd appearance from a young Bradley Cooper as a lost traveler) is massively hit or miss. That's a lot working against you. Somehow...he pulls it off. Using the massive amount of webcams set around the house as his angles and shots, he has a ton of fun giving a lot of suspense and tension from the limitations. Things happen off screen. Sound cuts out and becomes digitally distorted. The editing is fantastic in between time lapses and places and despite its basic plot, the script works very well in getting the audience to buy into its twists and seemingly insidious subtleties. These are what sells "My Little Eye" so impressively.

The lacking budget and cast do hurt the film overall, but some great creative directing and strong writing make this a gem in the rough. Although it would never find its mainstream audience since its 2002 release, if you are looking for a solid thriller than look no further than "My Little Eye".