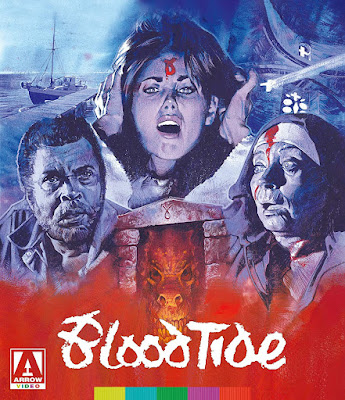 Between the cast, the writers, and a ‘creative consultant’ credit to Brian Trenchard Smith, I was positively excited for Blood Tide to get its new Blu Ray release from Arrow Video. Could this be another long-lost forgotten cult gem that was discovered while dragging the waters? On paper, absolutely. It reads like a sure-fire hit with its combination of Greek island cult elements, an ancient monster, and the horror meets adventure narrative. However, Blood Tide is a film that oddly evades ever dedicating itself to any of those pieces. Instead, it leans heavily into the convoluted dramatic tension of its characters and takes itself wildly seriously as it loosely ties together its genre elements. At the core, there is a great film, but the results of this 1982 aquatic thriller is far from there and the film ends up being more of a slog than the film it looks like on paper.

When Neil (Kove) and his wife (Weller) end up on a Greek island looking for his sister (Shelton), they stumble onto an archeologist (Jones) who is trying to uncover an ancient mystery. When he accidentally unleashes a water monster that is hunting the local women, they must all band together to figure out what the creature is and how to stop it.

Using that synopsis, it’s easy to see why Blood Tide could be a cult classic. Written by Nico Mastorakis and Richard Jefferies, who also directed the film, and produced by Brian Trenchard Smith, this film should be one of the most batshit and outlandish films of its ilk. Yet, it’s a film that never digs its heels into its exploitative roots. Instead, Blood Tide attempts to make a film with the intentions of a Lovecraftian tale about ancient evil and a modern group of explorers that try to comprehend the culture built around it. Still, sounds intriguing right? The film can’t even manage to execute that as all of its atmosphere is squandered with dialogue-heavy sequences, thin character justifications, and the depth of a shallow kiddie pool. In many ways, Blood Tide strikes a very intense resemblance to the 1993 Italian horror film Dark Waters, but where this film stumbles through every one of its ideas that latter film soars in its artistic approach.

To its benefit, the film does feature a few key moments that might attract cult cinephiles to its corner. Director Jefferies embeds a few key sequences, particularly in the first and final 15 minutes, with some visual grandeur that’s heavily used in the trailers. It’s here that one can see just how slick and cool Blood Tide might have been with a punchier script and superior pacing. It should also be mentioned that, while most of the cast is doing a decent job trying to sell its boring dialogue and thin character choices, James Earl Jones is just bringing 1000% to the table. He’s quoting literature, he’s got crazy eyes for a majority of the film, and his final face-off with the generic and questionably designed water monster is unintentionally awesome. He even makes the most out of the one comedic set piece of the film, where his girlfriend brings him a watermelon and her proceeds to punch through it and eat the shards. Blood Tide isn’t a total bust.

The Arrow Video release of the film, like many of the other Nico Mastorakis’ films they’ve released ala Island of Death and The Zero Boys, is an incredible transfer for a film that more than likely doesn’t deserve it. The restoration is starkly impressive and the rest of the release will certainly make this film one to own for fans of the notorious filmmaker. There’s a fantastic interview with Nico on the release and a commentary from the director that handily add a lot of fun to the material and, honestly, make the film better after watching and listening to them.

All in all, Blood Tide is a disappointing film that rarely lives up to the promises of its concept. The glacial pacing, choppy script, and thinly developed plot undercut the fun of its concept and fantastic cast. There are moments where one can see the incredible genre film at the center of it all, particularly in the bookends, but it’s far too little to save the film from its own faulty foundations. For those who enjoy digging into the filmographies of the various big cult names involved in this project, it’s hard to not recommend this film for just how odd it is, but for more casual movie watchers this might be one to skip out on. 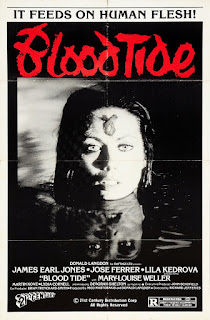