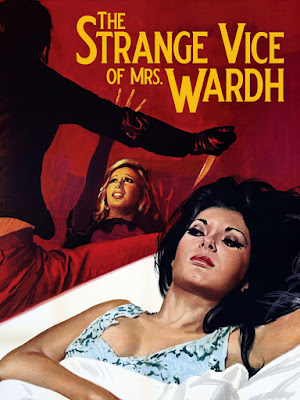 Following the exploits of the young wife (Fenech) of a diplomat, the film chronicles the arrival of an evil ex-lover, the potential new mister, and her crumbling marriage to her husband on her life. When a killer of women starts knocking off well-off ladies in town, she starts to believe that perhaps one of the men in her life just might be the killer.

As with so many of Martino’s works, what makes Strange Vice so intriguing is that for an erotic thriller from this era, it rarely feels as sleazy as it could have. Quite honestly, some of Martino’s other films slide further down this path (Your Vice or Torso certainly feel more exploitative) so this one could have easily embraced the romantic three way meets psychotic ex-boyfriend angle with little regard to the artistic side. Yet, even some of the more obvious sequences of titillation feel as though they are shot with an artistic sense which lifts the film up considerably. There is plenty of Edwige Fenech nudity to be had, for those where that might be a selling point, but the film is far more interested in how her sexuality is manipulated by the men in her life than it is as using it strictly for exploitation purposes. It gives the film a thoughtful edge that makes it far better than expected.

Naturally, it helps that the film is anchored by another incredible performance from Fenech, whose natural seductiveness only benefits the twisting plot and shifty narrative as her world becomes a big blur of questions and suspicions of those around her. She’s balanced by a strong male seducer performance from George Hilton, but this film truly belongs to her. It’s fascinating how Strange Vice essentially reverses the gender roles in a clever way. This film could have easily been a man torn apart by three women if it wanted to jump into noir territory or go even further towards exploitation. The choice allows Fenech to carry the film through most of its dramatic thriller set up as it only uses its giallo death sequences to punctuate her paranoia and terror. It’s this choice that certainly cements the film as one that works on all levels rather than just the kills or tension.

As for the horror elements, Martino and company do lean away from being too gimmicky with the killer and those key moments. Outside of a garden chase sequence or the final kill to set up the finale in the third act, this film plays things in a more grounded way. Yes, it certainly hits many of the giallo tropes – the black leather gloves, the straight razor, the POV shots, etc., but it also uses them smartly in the script. The mystery of the killer’s identity is wrapped cleverly into the final act so that the reveal is something of a classic giallo right hook for those who were invested in the story and the characters. It also follows that up with the final uppercut that just seals the entire deal and forces the viewer into watching the film again to see how it all played out.

As mentioned above, Severin is the distribution label that dropped this gorgeous Blu Ray for the audience. It’s notable that one should order the film sooner rather than later to grab the CD that comes with it for the soundtrack, but if not the rest of the release is fantastic. The new cover artwork is great, the restoration is impressive (I prefer it over the cooler tones of the Shameless Blu release – but I believe it’s more of a personal preference than anything to do with actual transfer,) and the features are a wonderful bonus. In particular, I’m a sucker for great commentaries and Kat Ellinger once again delivers in spades on this release in that category.

Although The Strange Vice of Mrs. Wardh represents a giallo film that feels far more concerned with the character arcs and dramatic tension caused by its romantic trysts than the actual kills and thrills, the combination of the two approaches is truly effective and impactful. The performances are fantastic and Sergio Martino gets maximum pop out of the visuals, tones, and narrative flow to deliver a stellar film. Not only is this one of the best giallo films, it’s one of Martino’s best too. If you don’t have this film in your collection, this latest Severin Blu Ray only gets the highest recommendation. 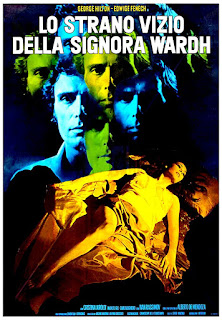