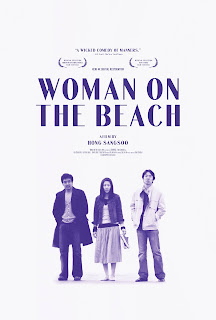 
** This review copy was provided by Grasshopper Film **

The seventh film in Hong Sang-soo's library of works is one that I actually hadn't seen in the decade long obsession I've had with him, but thanks to this film seeing life once more through the newly restored 4k version, done by the Korean Film Archive, and being released by the aforementioned wonderful folks at Grasshopper Film, I was able to finally explore one of the few films of his I hadn't. Just how is Woman on the Beach? In a word, it is brilliant, and I think in part that has to do with the surprisingly straightforward approach to both the narrative and it's structure. 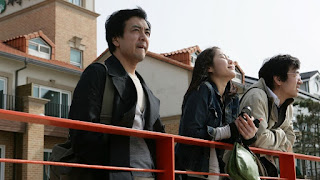 Kim Jung-rae is a director whom is currently writing a screenplay for his next film, but he finds himself struggling to complete it. He invites his friend, Chang-wook, to come out to the west coast to a beach where the two can relax and he can finish his project over a weekend. The problem is Chang-wook had already made prior plans to visit his girlfriend Moon-sook, but after some convincing and agreeing to let her tagalong for the weekend, Chang-wook agrees and the three set off towards the beach. After a small love triangle forms, a leaning for desires previously established seems to shift and flourish between director Kim and Moon-sook. Here, things begin to change between everyone involved and the story really stays simple all the way through, but Hong gives us so much time getting to know everyone here and these are some of his most fleshed out characters to date. I thought Kim was played to perfection by Kim Seung-woo (Yesterday). He is a typical male that seems to have a one-track mind in most of Hong's works, but then as the story unfolds and the characters develope, we see a lot of layers and complexities in Kim that make him one of the standout characters in any Hong outing. I really didn't like him at times, but he felt so layered and the same can be said for Moon-sook, who is portrayed brilliantly by Ko Hyun-jung. She works in the film industry as a composer and her attraction to director Kim is pure and instead of just being an object of desire, there is a serious albeit fractured connection between the two. I absolutley loved seeing the ups and downs between Kim and Moon-sook and found myself wrapped up in all their crazy feelings. 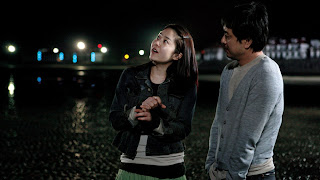 Technically speaking Woman on the Beach looks great. The beach setting and the overall atmosphere seems to be brimming with warmth at first but as things go along you begin to feel the chill of the ocean air settling in. The music is typically quirky in Hong's film, and while that is certainly no exception here, there are some very great moments accompanied by rather serious pieces of piano and orchestra that added yet again another layer to the overall effectiveness. Even a smaller moment, involving a dog that is a recurring bit throughout really stood out and is in part strengthened by the accompanying musical piece.

I absolutely adored Woman on the Beach and am very honored to have had an opportunity to see the newly released 4k restoration. The film looks fantastic, but more importantly the film is fantastic and is potentially my new favorite film by master Hong. It's his most straightforward structurally, but easily packs more of an emotional wallop than anything else he's done. I think it easily one of his masterpieces. An extraordinary and complicated love story brilliantly told.