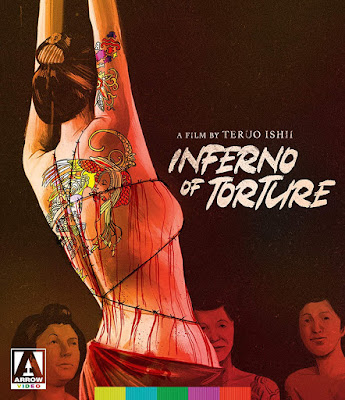 One of the beautiful aspects of director Teruo Ishii, the king of cult himself, is that he always rides this meticulous line between pure exploitation, bonkers film making, and thoughtful artistry. Each film leans in one direction over the other, but when it’s in balance the material can be astounding. Arrow Video has been rather dedicated to the auteur Japanese director in the last year or so, although one their first US releases was his insane Meiko Kaji fronted effort Blind Woman’s Curse, and with each release one gets a better sense of why he has the dedicated following that he does in filmland. While this latest release for his 1969 effort, Inferno of Torture, is definitely one that fans will want to add to their collection, it’s also one that struggles to find the previously mentioned balance in a way that is best for the story it’s telling. It’s ripe with his visual flair for bold design and it features a third act that’s blissfully intense, but it’s elongated setup and eye-rolling extensive exploitation sequences can be a bit of a chore to sit through at first.

After a young woman is sold into servitude at a brothel known for exotic torture elements, she finds herself the focus of a variety of unscrupulous men. However, an intense tattoo artist has taken a shine to her and her skin which leads both of them headlong into a descent towards the inevitable as they face off against unsavory foes in a bid for freedom.

If there is one thing that a viewer can call Inferno of Torture, it’s striking. The film has a tendency to wrap everything in a gorgeously exploitative manner. There is a script here, as mentioned in the synopsis above, but Inferno of Torture has more interest in what the story can do visually than what it can do narratively. The entire film is a kaleidoscope of color and intriguing filmic hooks. The fact that a large piece of the plot revolves around the brightly colored tattoos painted onto young women’s bodies is only justification for Ishii to pad the film with as much colorful imagery and nudity as possible. In this regard, Inferno of Torture delivers on its promises. It has plenty of eroticism and then moves swiftly into some very disturbing moments of torture. It’s visually a stunning film and even small moments, where a man is walking past a variety of triangle windows each filled with brightly colored glass, is something to behold. Even as the film evolves into a more traditional thriller and action narrative in the third act, Ishii shoots it all to punch the visuals more than anything.

Don’t misunderstand the paragraph above though, while Inferno of Torture is certainly a visual film first and foremost, there are things that Ishii and crew want to say. For example, the film very explicitly parallels sex with torture – and not in a sexually provocative manner as the lead characters, the women sold into servitude are tortured and take no pleasure in it. The film opens on a series of very intense sequences of torture and it ends in the same manner. Even the brothel is mostly torturous as its clients feed their carnal appetites mostly with violence. The lead character, Yumi – played with an inherent sadness by Yumika Katayama, ends up falling I “love” (which is certainly debatable) with the man that treats her as an idol and not some tattooed plaything for westerners that come to the house of horrors. The film has some depth as it proceeds to layer in feisty attacks on a variety of topics from capitalism to gender identity to foreign influence and it’s just enough to justify some of its extremely exploitative sequences of salacity.

The biggest hurdle that Inferno of Torture must overcome is an incohesive narrative. Sporadic voice-overs from multiple characters and its meandering plot lend well to the hellish landscape that Ishii maximizes visually and tonally, but it makes for a problematic watch overall. Much of the first two acts feel like a series of exploitative sequences and the actual plot takes much too long to rear its head. Once the purpose of the script and plot reveals itself, a strange love story that leads to a secondary protagonist, the tattoo artist Horihide, then the film feels like it has momentum. The third act is blissfully grounded and pissed off as Horihide attempts to wreak havoc and burn the entire system down that has bound his love. He’s at odds with his fellow artists and the business politics of human traffickers (aren’t we all?,) but after seeing what these women went through so is the audience and we are with him as he starts to stack up a serious body count. It’s just a shame that the film takes so long to lay out the pieces to get to this point.

The Arrow Video release of Inferno of Torture is, like their previous releases of Horrors of Malformed Men, Yakuza Law, or Orgies of Edo, another must-have release for fans of underground and provocative Japanese cinema.  The restoration is gorgeous (which, for such a visual film is the big reason to pick this up) but there is a fantastic commentary from Tom Mes and a partial piece from Jasper Sharp’s lecture on Japan’s counter culture that adds so much context and thoughtful historical foundations to why Ishii and this film are worth visiting. Compared to some of the other Arrow releases, this one does seem light in the quantity of features, but it makes up for it handily in quality. 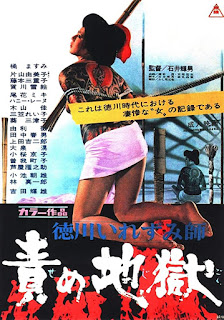 Compared to some of the other Teruo Ishii films that I’ve seen, Inferno of Torture is a film that aims very high but feels constrained by its exploitative chains. There is definitely an intention to deliver a visually arresting film with plenty of subtext to dig into, but it requires sitting through a substantial amount of exploitation to get there. For those who enjoy cult cinema and provocative film making, I handily recommend Inferno of Torture – especially if you pick up the new Arrow Video Blu Ray when it’s released on July 7th. It’s not one of Ishii’s best, but it fits right in perfectly with his auteur status and cinephiles will enjoy it for some of its bolder choices.