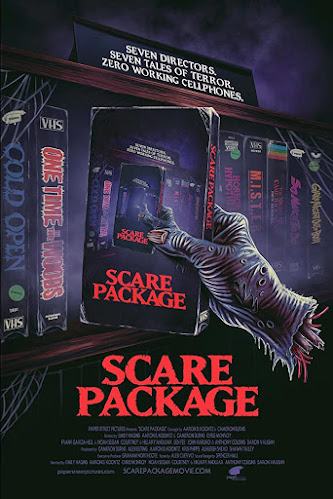 After not being able to see Scare Package at the Telluride Horror Show last year, I was remiss I was unable to attend one of the big hits of the film festival. Word of mouth was incredibly strong for the horror-comedy anthology and some of my fellow critics who saw the film highly praised it. ‘One of the best of the fest,’ they said. Thanks for rubbing it in. Fast forward to eight months later and Scare Package is finally getting a wide release in the US through the horror streaming service Shudder. Surprisingly, it was revealed to be on the most recent episode of Joe Bob Brigg’s The Last Drive-In and the entire horror community was going to be live-tweeting along with it for its premiere – myself included. While I am eager to watch the film again when it is uploaded next week, Scare Package is the perfect kind of film for this style of premiere. It is the quintessential horror party film. The jokes and gore blow by at a lightning pace while the structure lends itself well to more casual viewing on the surface, but the it’s also so loaded with genre heart that fans will eagerly embrace it. If the reaction by last Friday night’s crowd is anything to judge it by, the film is already a cult classic staple.
As with all anthologies, including but not limited to the variety that has been reviewed here at Blood Brothers, the quality between segments can fluctuate. Depending on the viewer’s taste, the mileage may vary. This is no different for Scare Package. For the most part, most of the segments in the film cater to the 1980s American horror genre, particularly of the slasher variety. If that’s not a genre you’re wholly familiar with then much of the fun and detailing may fall on deaf ears. If you’re reading this review, I’m just going to assume that is not the case and the slasher tropes will be quite familiar.

After a meta-driven opening sequence, where a stock side character becomes aware of his place in horror movie lore and attempts to change his fate (fittingly titled “Cold Open,”) the horror-comedy flick immediately unveils the wrap-around story of its concept – a horror video store. By this time, the film already reveals the heart and soul of its narrative drive. Scare Package is a horror film made by horror fans for horror fans. The in-jokes, from the first minute, are dense and particularly nuanced to the genre. They are routinely injected into a variety of short stories that revere the tropes and flaws of the genre as much as they poke fun at them. It creates a tonality that fits the fast pacing of its bounding leaps from story to story and makes even some of the weaker stories feel like it’s built to entertain.

In terms of the execution, the style of each story can waiver. The film starts and ends on its high notes, truly soaring in its third act which features a significantly effective cameo and some Behind the Mask inspired slasher comedic punches, but throughout its runtime continually provides the shrieks and giggles. The gore throughout is astoundingly fun and often times the various directors/writers feel like they have to maximize the limited time they are given. Even within the shorts, there are some wild spins and twists to the stories whether they are meant to be more comedic or more artistic. Either way, there is energy through the direction, writing, and performances that is immediately infectious which easily carries the film through any potholes and stutter steps that come naturally with the anthology format.

The biggest hurdle that Scare Package needs to overcome is simply whether or not its audience will buy into the concept. Anthologies are one thing, but the film does not hesitate to simply throw its viewer straight into the grinder with jokes, gore, and Easter Eggs pelting them from all directions. However, if a person is willing to strap in, this comedic horror ride is incredible. The shorts are just diversified enough to remain unique, the speed of the writing is debauched, and the style between segments only embraces the tonal insanity with the most eager of shit-eating grins. Scare Package is the whole package if you want it and it’s easily one of my favorite horror-comedies in the last decade. Horror fans take note, this is one to invite your friends over for a beer to watch.