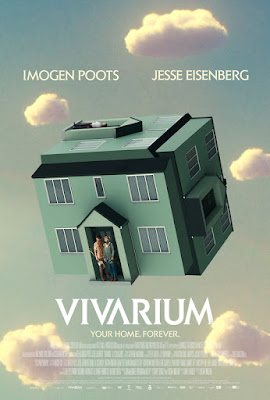 A young couple played by Jesse Eisenberg and Imogen Poots have been looking for a house to take the next step in their marriage. In this process, they stumble onto a strange real estate agent named Martin who is selling houses in a new development called Yonder. Their tour of the house and neighborhood goes from weird to weirder when the agent disappears. When they try to leave, they can only drive in circles through the façade of this landscape with no place to go but further in.

The inherent love toward the Twilight Zone tone is immediately noticeable when Tom and Gemma, Eisenberg and Poots, make it to the Yonder neighborhood. After the initial introduction to the characters and the incredibly palpable chemistry between the two stars, the film quickly moves right into the fantastical (other)worldly universe-building that is the core of Vivarium. The strange manner that the film introduces its plot developments just creates this sense of unnerving symbolism meant to attach itself and question the inherent idea of the “American dream” and the path that most traditional couples take. A fascinating approach considering the film is a co-production between Ireland, Denmark, and Belgium. While the plot itself is quite vague with far more questions presented than answers given, done artfully enough to warrant multiple watches for teasing out the details, there is a sense that everything in the writing and narrative is meant to say something. That kind of high-end concept is worth noting – even if the strangeness of the film is not for everyone.

Executing this lofty concept is another story in itself, where director Lorcan Finnegan and writer Garret Shanley ably craft an environment for the symbolic heavy narrative to flourish. While the intentionally false look of the sets in Vivarium makes for an uneasy place to dwell, it’s the balance between the unusual and the realistic reactions from Eisenberg and Poots that hammers home why it’s so truly unnerving. In particular, Poots absolutely stuns in the role here, carrying large chunks of the emotional weight of the film and there are moments where her facial expressions that carry the humor and the horror of the idea fully. By the time the third act rolls around, she is fully in command as the soul of this film even when it fully tilts into pure nightmare logic.

The fact that Vivarium premiered at Cannes last year is easy to understand once one has a chance to experience the film. It’s an engrossing and disturbing watch that simply left me deep in my thoughts and goosebumps on my flesh. It’s never a fully traditional horror, fantasy, science fiction, or thriller film, but it’s so firmly rooted in all of them that it can pull you in whatever direction it wants – a facet that truly makes Vivarium one of the best watches of the year.