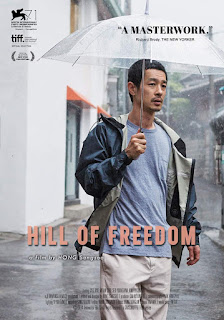 
For those who have been following my Hong Sang-soo journey in reviewing all his features and short films in chronological order here on Facebook will probably be confused seeing me leap from 2004's Woman is the Future of Man all the way to 2014's Hill of Freedom, but I assure you fragmenting and jumping ahead this way is as a result of this write-up coinciding with the June release of the film here in the U.S. after six long years. Was it worth the wait for Hong fans?

Hill of Freedom tells the story of a Mori, a Japanese man who has come to Korea in search of a local woman with whom he had feelings for during his last trip to the country two years prior. He writes her a note, which does manage to get to her, and we see that she is very sick. He retraces his steps from yesteryear, revisiting old cafes, restaurants, and even her place of employment that he also taught as an English teacher. She is nowhere to be found. Seeming lost, Mori stumbles onto new faces, makes new friends, falls for a new woman, and downs a ton of booze in a typical Hong outing that features an English heavy dialogue as its new focal point, that further expands on the 2012 Isabelle Huppert driven In Another Country, which adds the awkwardness of broken common language as a means of communication, although here it's taken to new heights, becoming both a strong point and weakness to the overall work. 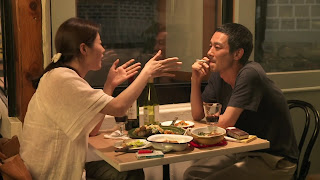 Mori is Japanese, so he finds a means of communication through speaking English, to every character he encounters. Pretty believable as South Korea has a huge percentage of its citizens learn the language to some degree. There is an older character who doesn't speak any that encounters Mori, which thankfully showed that not everyone conveniently knew how to speak with him. In terms of languages, I did find it frustrating however, that Mori's voiceover that narrates the picture wasn't spoken in Japanese. I know he speaks to everyone in English and writes a few letters in the language, but his inner voice would naturally be Japanese and give us a chance to hear him speak more naturally and would've certainly added a dimension to his character and a layer that just wasn't there.

The cast is great here: Ryo Kase as the awkward and always fumbling Mori, who goes through the array of emotions that one would when soul searching in a country foreign to them; Moon So-ri as Young-sun, the loveable owner of the titular Hill of Freedom café who becomes infatuated with our lead, and the supporting cast that includes great roles by Kim Eui-sung and the veteran actress and Hong Sang-soo regular, Youn Yuh-jung. Jung Eun-chae, the leading actress from Nobody's Daughter, Haewon and Gi Joo-bong (Hahaha) make for some hilarious extended cameos in one of my favorite scenes in the film. The amount of comedy throughout was quite refreshing. 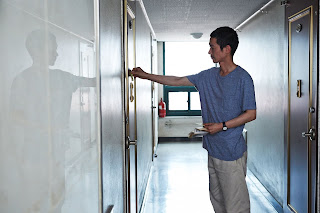 In the end, I do think Hill of Freedom is yet again another solid entry in Hong's ever-expanding body of work, but I don't think it quite hits itself amongst the standout titles scattered throughout. Still, it is more Hong Sang-soo to explore and clocks in at just a little over an hour, making for one of Hong's easily accessible works to date. It doesn't tinker with time structure here too much and everything that does go back and forth is simple to piece together. I really enjoyed my time with Hill of Freedom.