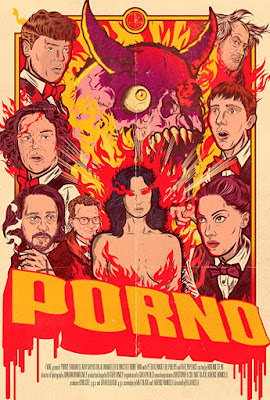 It’s closing time at a small theater in a small Christian town in the 90s. We see the theater’s owner lead his crew in prayer before heading off, telling the young people that after they clean up, the pious, straight edge projectionist Heavy Metal Jeff (Tan, otherwise best known from a brief appearance from AMC’s Preacher) will run whatever movie the group chooses. Jeff as a character carries a lot of this movie on his shoulders. He’s the best-defined character and his earnestness leads to really good moments of levity, including trying to mentor a character through a crisis of sexuality by comparing it to his own struggles with nicotine addiction before letting God back into his life.

The theater crew finds a vagrant hidden in the theater, and in the course of chasing him out, discover a boarded off storage basement, where an old film can catches young pervert Abe’s eye. They convince Jeff to run the film and strap themselves in for the mysterious picture show. As it starts, strange symbols appear on the screen, as does a nude lady and what appear to be cultists. “Is this an art film?” of the confused kids asks earnestly. Maybe they should’ve put on Encino Man, as originally planned… though it is admittedly debatable in retrospect which would’ve been the worse fate. The naked lady from the movie begins appearing to the characters in reality, eventually revealing itself to be a succubus, a demon that feeds on lust. The rest of the film is inevitably trying to survive and ultimately recapture the otherworldly evil, preferably without destroying the theater or letting their manager know what they’ve unleashed.

This film’s strengths and weaknesses stem from the same place. Porno feels like a passionate, but definitely amateurish, first time feature from director Keola Racela and writers Matt Black and Laurence Vannicelli. There is a fun energy and enthusiasm that permeates every frame of this movie. Although I would say that the cinematography was a bit rough, it was also dynamic and interesting. The dialogue is awkward, even stilted, but it’s also efficient, occasionally funny and exposition (the arch-enemy of the new writer) is handled deftly. There are the distinct building blocks of a real masterpiece here, anchored by some slightly janky, but basically good looking and very gory effects. One other real shoutout here is the sheer audacity of a movie that has unisex nudity, expressly religious and sexual themes, AND on-screen genital mutilation.

All of that said, audacity isn’t the same as quality and there are some distinct shortcomings here. A lot of the characterization is thin by broadly sketching characters like the pervy kid and the girl trying to prove she’s earned her promotion. There are standouts, Jeff and Ricky namely, but mostly this is fodder. Also, the plot is pretty thin, as what I wrote above is less synopsis, and more the first act and a half ostensibly point by point. Lastly, everything about it just has the feeling of a student film, and not in the film school sense, but the high school. There are a lot of things that go nowhere, and although the exposition that’s there is well threaded into the movie, you’re left feeling like you don’t understand the mechanics of the demon or magic at play, and that leaves the film feeling slightly frivolous, leaning on common trope knowledge to bandage some of the thinner parts. If I may kick it while it’s down, a little, it’s pretty awkwardly paced as well.

The enthusiasm for genre, some of the shocks, and the effects do carry it a long way. I certainly don’t want to imply that this movie isn’t a fun watch since it certainly is. I think it will find it’s place among the great movies to throw on in the background while you’re scrolling social media because it’s very entertaining in fits and spurts.