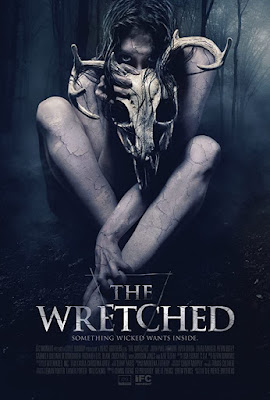 The quick and dirty review of this movie, and a comparison that everyone has pointed out, is Fright Night but with a witch. It’s one of those comparisons that’s got to be a little frustrating, in that it’s a great pull quote and it’s true enough that no one is going to disagree with it outright. A coming of age horror story about a troubled kid with a monster neighbor that no one believes him about. It fits as a series of bullet points. That said, I don’t think it’s necessarily a fair comparison, and it’s not just the significant tonal differences. Firstly, a small bit of business. As a long time nerd, and especially a DnD nerd (3.5 for life, I’ll fight anybody), I don’t think it’s accurate to call the monster in this movie a witch... It’s obviously some kind of hag, a witch-like creature. I refuse to bog this review down with that detail, but my soul needed it said at least once.

Ben is a troubled kid sent to live with his father and work the marina his dad runs. His parents’ divorce is imminent, and he’s gotten himself into some sort of trouble that he spends a fair chunk of the movie refusing to speak about. It resulted in a broken arm, however. He’s dealing with a lot of the standard coming of age issues, difficulty speaking to girls, bullies, an inhuman child-eating creature next door that no one believes exists. In retrospect, maybe I should elaborate a bit on that… the other employee at the marina is a girl named Mallory that Ben finds himself instantly taken with, and some “upper crust” trust fund dicks who have a boat there, provide the bullying, taking the form of near prerequisite tripping and verbal mockery. He also befriends the neighbor kid Dillon, and between the kid and Ben, they start to notice some strange goings-on, including what they assume to be a wild animal hiding under the porch.

As time goes on, the creature takes the form of the neighbor’s wife Abbie and begins taking neighborhood children. As Ben and eventually Mallory come to discover, the creature is a witch known for possessing people and eating children, but more frightening, with the ability to make you forget the child ever existed, as Ben discovers to his horror when his neighbor simply denies ever having had a kid. This is sort of my point of contention with the Fright Night comparison, it’s a small difference, but Fright Night is still a Dracula story. There’s a vampire who’s a new neighbor, and even a Van Helsing type in the form of Roddy McDowall’s Peter Vincent. The Wretched, as a creature, has the capacity to look like anyone. That trait alone presents a different type of horror, more akin to the paranoia of The Thing or Invasion Of The Body Snatchers, not to mention the “is my neighbor a killer” archetype that long predates the classic 80s cheese-fest (Rear Window, most famously). Not to mention tone, The Wretched is a pretty dour movie, preferring to live in earthy tones and cramped shots, intentionally emulating the witch’s hide-y hole beneath a tree.

The movie’s strengths are its energy, its tone, some really gristly effects, and some decent, albeit trope heavy writing. It’s also extremely well cast and well-acted. Plus, there are things in this movie that shocked me to my core, and as a long time avid, some would say fanatical horror lover, that is a unique thing that does bear mentioning. On the other hand, the pacing is a little on the slow side with a couple of repeated plot beats, and as I said though some of it is jarring, other effects are a tiny bit janky. Every positive thing I have to say about The Wretched involves its horror, its tone, and moments of suspense. But I also described it as a coming of age film, and every part that slots into this archetype I found pretty lame. There is an entire party subplot that could easily be excised from the film to tighten it up. I don’t want to be overly hard on it either, as it also mostly suffers due to this comparison being inherent between the film’s two styles.

All in all, this is definitely a movie worth a watch, I myself was able to see it at an open drive-in, about thirty-five miles east of my home in Los Angeles, and for what it’s worth? If that is an available option for you, I couldn’t suggest it more highly. Frankly, it’s the perfect way to watch a movie like this. Even barring that, I’d say this is definitely at least a rental, if maybe on sale.