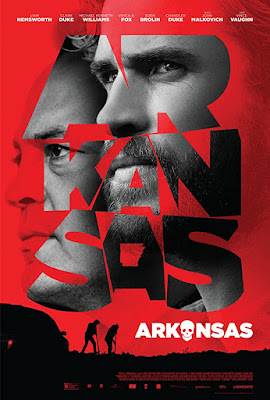 Arkansas is the kind of movie that doesn’t come along especially often, something compelling and intense, while being extremely quiet and meditative. Existing like a Michael Mann script filmed by Vincent Gallo, this film is (typically comedic) character actor Clark Duke’s feature writing and directorial debut. And as far as that fact alone goes? I feel very badly for Duke that this film came out at the point in history, it did because this film should be making huge waves right now, and will likely at this point be lost amongst our world’s current real crises. Which is a shame, because this story of crime, vengeance, and miscommunication feels especially relevant to its release year of 2020. Though in the interest of keeping this review apolitical  and timeless, it’s worth noting that rumination on doing what it takes to survive, whether it’s with honor, hook and crook, or lies, both direct and of omission, and the fallout from all of those choices does feel like a message that could stand-in any decade.

Liam Hemsworth (the not-Thor one) plays Kyle, a drug runner for an affiliation of gangs in the American south, a kind of very loosely “organized” crime group. He’s not much of a talker, and is quick to anger and intimidation, but slow to actual violence. This contrasts strongly with his new partner, Clark Duke’s Swin, who is a loud mouthed, jovial guy who prefers to talk his way into and out of situations. He says he’s not much of a fighter, but that’s okay because he and Kyle are going to be friends. “Everyone who meets me wants to be my friend,” is his catchphrase insomuch as a dramatic character can have one. The two are assigned to a trailer park where they continue to smuggle drugs throughout the south guided by John Malkovich’s Bright, a supposed subordinate to the mysterious Frog, and the middle man between the enigmatic distributor ‘She,’ for the various points of sale more or less anywhere south of the Mason-Dixon Line.

Malkovich is playing slightly against type here, a pleasant surprise, as the very low-key and generally genial “park ranger” who has some strict rules for our boys, including not dating anyone from town (something Swin is almost humorously quick to dismiss) but is otherwise incredibly friendly. After a tense delivery involving a local distributor and his son, the son follows Kyle and Swin back to their home, where he tries to rob Bright of his stash, not knowing he was only a middle man. This goes very badly and ends in the deaths of both Bright and the son which is discovered quickly by Kyle. They decide to clean up, and since they did nothing wrong (save forgetting to watch for a tail) feel no need to run, waiting for an opportunity to explain themselves to Frog and trying to maintain the status quo otherwise.

From here the film transitions to decades earlier, where we finally meet Frog played by Vince Vaughn, continuing an amazing streak of believable and sympathetic, albeit brutal criminal characters. No two have been quite the same and it’s kind of an astonishing mid-career niche he’s found for himself. We come to understand how Frog came to power, having escaped one town to start over elsewhere, under mentor Almond (in a l really good turn from The Wire’s Michael Kenneth Williams). Almond gives Frog a carton of cigarettes and tells him to make it a business by the end of the week. Clever and ambitious, Frog not only is able to accomplish this task, but does so too well, running out of cigarettes rapidly. Almond thinks he’s teaching Frog a lesson about making use of the stock available, but Frog thinks his growth is being stunted and betrays his mentor, taking over his business.

And those are the two trajectories we follow through the rest of the movie, as the choices made are made and we’re left to see everything play out, often watching in horror as the best of intentions is perverted into paranoia, assumptions, anger and inevitable, but tragic violence. This movie doesn’t play nice. It’s not a Tarantino bloodbath at any point, instead it focuses on its goal of expressing consequence. The action that exists in this movie is brief and not especially graphic, though not naïve or bloodless either. People die, Arkansas does nothing to especially condemn or glorify this. Just put an unblinking eye on it without using the diffusing technique of hyperbole to make it any more palatable. But more in line with the point of it all, at least as I saw it, was that by the time the film reaches its conclusion it feels entirely inevitable. The real tragedy of it is, also by the end, you can see at least a few seemingly small choices per character that would’ve completely diffused everything, or changed their course entirely, but the movie is also deft enough in letting us know it’s characters that any choices made feel similarly inevitable.

There is no particular writing, plotting or technical faults to speak of. It’s not especially dynamically shot; nothing visually sticks out in my mind. It’s not effects-heavy, nor is it shot in an amateurish way per se. It really feels like something written for stage, but with the budget to film. Your patience with this can definitely vary. As someone who unironically enjoys Baz Luhrman movies, I’m the first to admit being partial to the visual part of motion pictures. That is, however, a personal taste and nothing in how this is shot is wrong, either.

This is not a movie for everyone. It is genre fiction strictly speaking, and it will have a definite cult appeal. It’s not the kind of cult movie one typically thinks of with that term, being more in line with the small, but extremely devoted fanbase something like The Way Of The Gun gets. Like I said up top, this is something that I think would’ve gotten some word of mouth business and even awards buzz in a different year where the film news cycle isn’t entirely dominated by what is and isn’t being moved around. The kind of landscape where a scrappy indie crime drama could break out, even a weird one. As it stands, and like I said it will definitely find its audience eventually anyway, one that’s going to be a devoted one that I count myself among. At the very least, this is an easy movie to recommend to anyone that values plot, writing and acting above all else, and I cannot emphasize enough that the themes of communication, or lack of it, are really strong and have left me thinking about it days later.