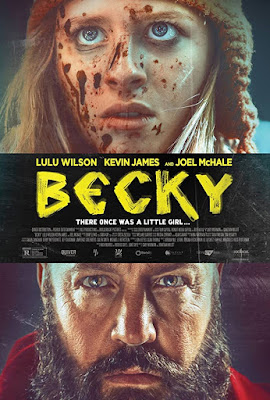 “There was a little girl, who had a little curl, right in the middle of her forehead. When she was good, she was very good indeed, but when she was bad she was horrid.” So goes the Longfellow poem, and so says Becky’s creepy childhood doll almost by means of warning. Becky is the sophomore effort by directors Millot and Murnion (following 2014’s excellent child-zombie comedy Cooties) and it is a wholly different beast. In turns both brilliant and exhilarating while a little shaky and muddled, this film is a brisk entertaining horror-thriller that knocks on the door of excellence, though unfortunately will have to settle for just being good.

The eponymous Becky is a very angry young girl. Her mother recently passed and she’s furious that her father has already started dating again. Lulu Wilson (one of this film era’s multiple working child horror stars) and Joel McHale  (the famously sarcastic comedian playing wonderfully against type as a very genuine, loving parent) have an interesting, extremely believable chemistry. A really astonishing feat given that everything we see is a parental relationship in free fall. McHale’s Jeff is almost too understanding and it allows Becky to walk all over him. They’re spending a weekend in their summer cabin, along with Jeff’s new girlfriend and her son, a fact that enrages Becky. She storms off to be alone in the woods behind the house, which is why she’s luckily out of Dodge when a group of escaped convicts invade, led by the Nazi Dominick.

Kevin James, the king of queens himself, makes a monster impression as Dominick. And I mean that in every sense of the term. He is chilling, talking his way into the house with a story of a lost dog, before seeing Jeff’s dog and identifying it as impure. Seeing Jeff and his girlfriend Kayla’s multiracial relationship, he begins a frightening, steely-eyed monologue in the danger of impure dog breeds, an obnoxiously common online racist argument after which the other criminals reveal themselves and the film launches into pure violent action and never slows again. Becky is merciless with its gore, everything from stabbings with improvised weapons to marshmallow skewer torture and it like relishes its cruelty. It doesn’t quite reach the heights of something like French New Extreme Wave classic Martyrs, but there is some grisly stuff including violence against children and animals. If either of those things are too much for a person, I’ve always found that completely understandable, but it’s not where the movie chooses to spend its effects budget.

No, that choice goes to Becky’s eventual retaliation. Although this movie has been (fairly) compared to the mood of a horror Die Hard or Home Alone, I actually see it as more akin to a revenge film through the lens of something like Fincher’s Panic Room. The effects in this movie are fairly satisfying by and large with one moment being extremely squirm-worthy. I think that the movie is really exciting and at its best fairly brave, asking the question, “was Becky destined to inflict violence, regardless of this situation?” A more frightening question than you’d assume when discussing an otherwise average 13-year-old child, in what is distinctly not a “ creepy child movie.”

However, that certainly does not mean Becky is without its share of problems. This movie features a blatant McGuffin (an object in a movie that exists only to forward the plot and for no other reason. See also: the knife, and subsequent tracking device in The Rise Of Skywalker) was in the form of a key that Dominick really wants. This is exceptionally frustrating in a movie like that frankly doesn’t need it. The revenge film archetype is strong enough on its own, and excising this plot point would go a long way in streamlining a movie that’s so close the being great. One could also make a real plot point out of the key, instead of its pure McGuffin status. Regardless, this all muddies what is an otherwise interesting exploration of a 13-year old going on a killing spree against escaped convict nazis who are menacing her family, even if it’s one she hates.

Becky is a film that is will definitely thrill a person and keep them at the edge of their seat. There’s a very interesting scene that opens the movie where a cell block brawl leading to the transfer and escape of our antagonists is intercut with a school fight that Becky is watching. The comparison is interesting and apt, but it doesn’t say anything about Becky or Dominick. We have no context for the school fight and Becky’s role or feelings about it, and only slightly more idea about the prison and Dominick. I think this is a perfect encapsulation of Becky as a whole. It’s a good movie that really feels like it has something to say although that message is muddled. Regardless, this is a really fun movie to watch. If you’re into this sort of brutal home invasion horror then it’s extremely easy to recommend, given proper expectations.