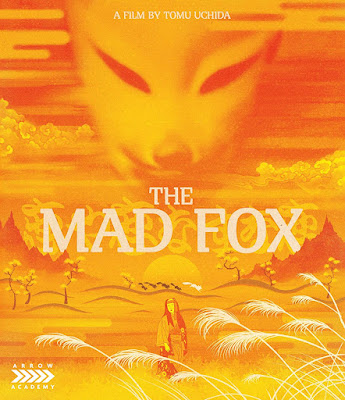 One of the best things that Arrow Video and their sister label Arrow Academy has done in the last few years is that they have really dug into classic Japanese cinema for release in the west. While Criterion certainly whets the whistle with their Akira Kurosawa releases and a few other key ones (notable for this review will be the Samurai Trilogy,) Arrow has picked up the pace and delivered iconic releases for both genuine classics and those of the cult variety. The Mad Fox represents a bit of both of those worlds. Directed by Tomu Uchida, a prolific director that is finally getting more of his films beyond the previously mentioned Samurai Trilogy released here, The Mad Fox is both a gorgeous classic medieval Japanese dramatic tale and one where the fantasy elements edge it further into genre territory than expected. While the film is certainly well executed in a variety of ways, it’s also one that has a rather intriguing and often baffling script that makes it uniquely odd. For those who want to dig into Uchida’s filmography or perhaps just watch a wild cinematic experience, The Mad Fox certainly delivers for both of those groups.

It should be mentioned at this time that, while I have seen my fair share of Japanese films, the romantic and fantastical dramas of the early 60s are very much not something I am well versed in and, thus, The Mad Fox is something of a punchy way to leap into it. For that reason, if you are in the same boat as myself – I cannot recommend this Blu Ray enough simply for Jasper Sharp’s commentary that truly helped me understand what film I just watched, why it makes some of the choices that it does, and why this film deserves some attention. Not that a film should require someone to guide its viewer through the entire thing, but for someone that is not well versed in the mythos, fantasy elements, or time period of The Mad Fox – it’s a must listen.

Now, to get to the film itself, one has to very much approach The Mad Fox as a romantic drama that increasingly detaches itself from reality for the fantastical. For a film that takes two hours to play out, it’s intriguing that the script of the film spends nearly 40 minutes setting up the plot of the story. It includes an entire film’s worth of storytelling and character work in this first act and, quite honestly, can feel like it drags a bit as it pours out its material. Even as the plot moves forward after that, the rest of the script almost feels like it could have been a sequel rather than the latter acts of the same film which can be an immense amount of film to consume in one two-hour sitting. The final act, which I will address more in a second, certainly jumps the shark into some fascinating and mind-boggling directions, but it’s necessary to address for those ready to leap into the film as it can be quite the feast to digest if you’re not ready for it.

Fortunately, even as the film vomits out an incredible amount of character work, plot, and mythos, The Mad Fox is slathered in a gorgeous aesthetic that carries it through. Director Uchida, who also directed the phenomenal Bloody Spear at Mount Fuji which Arrow Academy also released, takes this story and just embeds it with some powerful visual style and panache. There are some fantastic choices, like the opening scroll or how a fire develops in front of a confrontation, that just truly punctuates how incredible Uchida is as a director. Partnered with some powerful performances, particularly from Hashizo Okawa and Michiko Saga – the latter actress portrays three characters, and this film powers its way through its meandering and dense narrative to embrace a dual nature that impresses as much as it perplexes.

Steamrolling off of that, it should be mentioned that as The Mad Fox continues to tell its story, Uchida makes a brilliant choice to have the visual style pull further and further from its naturalistic setting, performances, and style for a more theatrical one. This is due to how the narrative increasingly becomes more fantastic. There is the introduction of animal spirits, most dynamically a family of foxes, and a young female fox referred to as Kon in the film, and the choices around these moments are beautiful and very theatrical with the obvious use of stages, costume designs, and fantastic masks. According to Sharp’s commentary, the story was originally a bunraku play and by the final sequence, the film completely adapts a theatrical visual tone of sets and feels that parallels playfully with the camera work and performances. By the end of the film, my jaw was on the floor simply from Uchida’s bold stylistic choices.

It’s been mentioned twice now, but the commentary cannot be understated for this film. Jasper Sharp always delivers a master class in cinematic education for his work on Japanese film and considering that this Blu only features his commentary and a trailer as features, it’s hard not to recommend it as the best part of the release. The striking visuals are brought to life by the new high definition portrayal of the film on Blu and that should also be noted for fans.

Although I will give this film a score below, The Mad Fox is one of those intriguing films that simply defies having a score. It’s a pure cinematic experience and while its narrative and plotting seem to meander too much and the film seemingly ends on a ‘to be continued’ moment as if this is just the beginning of a much larger story, The Mad Fox does deserve a massive recommendation for its bold choices. The visuals are stunning, the performances heartfelt, and the choices in the narrative as the film unfolds make it something to behold – even if it’s not for everyone. 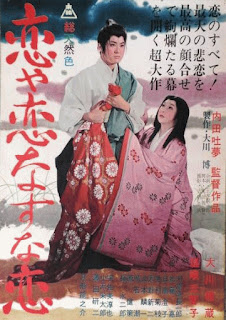