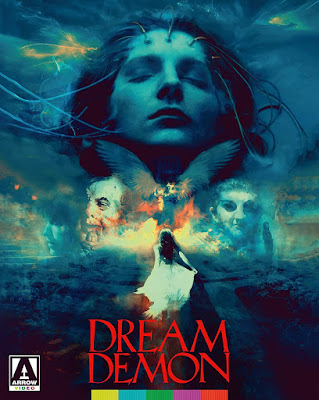 With relatively no expectations going into Dream Demon, it’s something of the perfect film to surprise its viewer. With a title like Dream Demon along with some of the taglines used for the film, one could regularly assume that this 1988 horror flick was simply a Nightmare on Elm Street or Phantasm knock off. In reality, the film is far more serious and traditionally dramatic than what those franchises had become by the late 80s. Dream Demon is certainly more in the vein of the atmospheric and European flavors of Italian cinema of the 70s. It’s an impeccably paced and surrealistic dive into the ‘haunted house’ film that hardly gets the love that it’s due. Unsurprisingly, it’s Arrow Video that’s unburying this overlooked classic for release and it’s definitely one worth the gander for horror fans.

When Diana (Redgrave) moves into a new house, in preparation for her upcoming public wedding to her military fiancée Oliver (Greenstreet,) she starts to have vivid and horrifying dreams. When she befriends a visiting American Jenny (Wilhoite) the dreams become so real that her friend starts to experience them with her – as if they were real. As the lines between nightmares and reality blur, the two women must decipher the messages and figure out why this is happening now.

With an incredible 80s run of films like Battle Truck and Black Moon Rising, director Harley Cokeliss is something of an odd choice to helm an atmospheric horror film centered on the revulsions of dream logic. Once the film starts cooking with gas though, he ends up being an incredibly effective choice here. Narratively speaking, since the film heavily relies on dream logic and the blurring of reality and fantasy, it’s reliant on a director with the ability to finesse the film without relying on the most cohesive and finely tuned script. With plenty of visual panache, Cokeliss bounds between strong character work and the anxieties of fantastical set pieces to deliver plenty of memorable moments. Just the opening four minutes, which features our bride-to-be’s first nightmare about her upcoming wedding, the stage is set to unnervingly pop its audience once or twice. Visual symbolism abounds here and with some delightful use of camera tricks and sharp editing, Dream Demon shuffles through the plot holes and narrative slides with relative ease.

Cokeliss is given some strong elements to work with here and Dream Demon is carried by a couple of subtle and strong performances from its two leads. While Redgrave certainly shines as the often anxious main protagonist, Diana, the film has a remarkable ability to also give Wilhoite’s Jenny an incredibly strong character and arc that parallels the lead as they deal with both the future and past simultaneously through shared dream sequences. This ability to knit together two characters dealing with different angsts in the same manner and how those themes link up showcases how the actresses are able to work with a potentially patchy script. It’s a fantastic way to inject some subtle gender and social commentary into the film and the actresses, partnered with a slew of almost caricature-like male secondary characters, just power through to carry the film. Even when the film starts to lean heavily on the ‘dream within a dream within a dream’ concept in the third act, the film so impressively works that it never feels like a copout.

As for the nightmare sequences, Dream Demon is also apt to succeed from moment to moment. The film isn’t keen on large spectacle, which would betray the intimacy of its concept, but in the grotesque gimmicks it still works. Some incredible effects work, including the dream manipulations of the two slanderous press members – played by Timothy Spall and Jimmy Nail, bring much of the horror forward and embrace the thematic weight of the film. It’s not a slasher nor features a forefront villainous ‘demon’ as the title would indicate, but it’s not afraid to push into some gruesome moments that reflect the messages. The effects are incredible and when they arrive the impact can be felt.

Arrow Video also seems intent to bring their usual (and still incredible) efforts to this latest release. Not only does the film feature a new 2K restoration that was approved by the film’s director, but it also features both the original theatrical cut and the director’s cut of the film. The restoration is brilliant and crisp, highlighting the film’s strong use of lighting and sound as part of the descent into nightmarish madness, and it’s easy to say that this is just the icing on the cake of an already impressive cult gem. As for features, it seems everyone was on board to do new interviews for this release and a nice documentary certainly adds some behind the scenes charm to the film too.

While Dream Demon wasn’t a film that I had many expectations for, it’s certainly one of the biggest surprise finds of 2020 for me. It’s a film that definitely requires its audience to simply run with its increasingly fantastical dream logic and blurred narrative as it goes, so for those who are not fans of the style then this might be a more challenging watch. For my money, Dream Demon is an impeccably fascinating film that balances its themes, strong visuals, powerhouse performances, and suffocating atmosphere into one of the best cult cinema finds of recent memory. 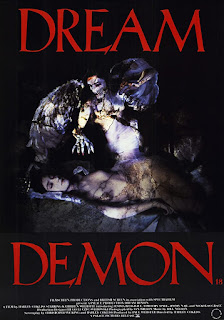 Written By Matt Reifschneider
Posted by DarkReif at 7:00 AM