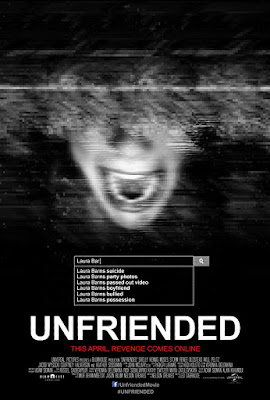 Although the found footage genre of horror has essentially seen its 15 minutes of fame come and go, it’s a genre that will never be lost for all of the same reasons that it grew to be a juggernaut of style. It’s cheap to make and it is an easy way for an audience to put themselves in the shoes of the characters. Those are two things that horror films feed on. Now, more recently as technology advances, found footage has more opportunities to take different angles as the same style. Instead of mockumentaries or found tapes/records that are showcased in a narrative style, we have films like the Unfriended series. Sacrificing the shaky cam panic of a cameraman on the run from whatever horrors await them, Unfriended takes a slick and occasionally clever spin on the in-the-moment horror. Its narrative is told completely from the screen capture of a computer.  It’s as straight forward as that.

For the first film, with the somewhat groan inducing title of Unfriended, we see a supernatural horror film told completely from the laptop of a teenage girl as she Skypes with her friends on the anniversary of the suicide of one of their acquaintances. Now, this does sound fairly gimmicky and perhaps a tad boring, but rest assured that Unfriended has a strange knack for manipulating the viewer’s attention. There doesn’t need to be edits as the person clicks through various open windows, there doesn’t necessarily need to be too much exposition spoken since most of it can be shared visually through web searches and social media profiles, and the film can use the all-too-convenient technology problems to create a sense of suspense as the horror unfurls. The trick to why Unfriended works so well (at least for me, as most horror fans tended to be jaded by it for a variety of reasons,) is that the brisk pacing and detail work really does create a solid sense of building tension and purpose for the film.

For example, The use of Spotify songs that pop up in the corner of the screen indicate tone nicely, director Levan Gabriadze navigates the use of a variety of different online programs to reveal the twists and turns of the plot, and the immediate sense that these characters are all intertwined by their own lies (a nice parallel to the social media sense of identity that confuses so many people in real life) generates a wonderful sense that their redemption is the only way to survive the onslaught of supernatural occurrences that will pick them off one by one. Where the film adds a surprising amount of depth in in how it uses the technology element of the film with teens to build a critique of how people build their own worlds online and how that doesn’t match what is happening in real life. When that online world starts to get out of control, in this case through a malicious spirit, it leads to real life consequence. Weirdly enough, it’s kind of clever in that way.

Granted, the story itself is your usual supernatural horror film, coming off a bit like Sorority Row gone webcam wild and it can be a bit trying on the viewer to have a group of teens essentially yelling at one another for an hour and making silly judgment calls. Throw the usual teen slasher tropes into a J-Horror inspired tech romp and that’s what Unfriended is on the surface at least. The performances are decent enough even though many of the secondary characters are painted with very broad strokes, and if you do not buy into the gimmick then the film will falter for its viewer immediately. Unfriended isn’t perfect, to say the least.

When going back to re-watch the film it holds up remarkably well and, if anything, it might be more enjoyable on multiple viewings.  It has a bit of depth to it, beyond some of the surface clichés, and the pacing and building dread makes the pops of horror violence fairly effective. Granted, most horror fans write it off immediately for what’s on the surface, but even then, Unfriended isn’t a film to disregard offhandedly. There’s a lot more to be found than a film that is regarded as modern horror spam.