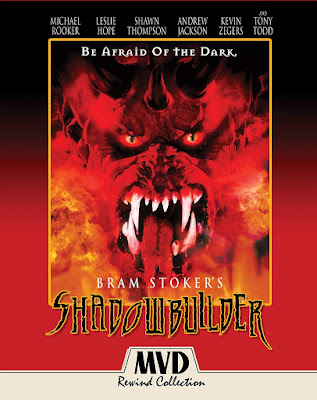 I’m a bit of a sucker for late 90s horror. There’s something about the aesthetic of straight to home video or low to mid budget horror from the era that hits a nostalgic note for me, so when Bram Stoker’s Shadowbuilder (also known as Shadow Builder without the iconic author’s name attached) hit my review queue I was generally excited to dig into a film from this era that I had not experienced before. Needless to say, even though the film is hardly perfect by any definition of the word, it also hit all of the right marks for me. Shadowbuilder is an enjoyably off beat supernatural horror action flick with some fantastic casting. It’s a product of its time, particularly in its use of visual effects around its villain, but its combination of cult horror with supernatural slasher elements was charming and fun.

As if it needed to set the tone right away, Shadowbuilder starts off with an atmospheric cult ritual in a shadowy abandoned building, where the always reliable Michael Rooker is investigating the situation fully clad in black leather jacket. Shit goes haywire and he pulls out dual handguns, complete with laser sighting, blasting cultists and generally doing what Rooker, err…his character Vassey, does best, kicking ass and taking names. Yes, this is one of those films. It takes horror elements, packing it with some action and intense tension, and then layers it with plenty of stylish visuals that relies heavily on shadows and light. As the film goes, it does get cheesier, but this opening sequence definitely set the tone perfectly and this kind of genre bending and swift moving plot help make it more enjoyable.

Like other films of this ilk, similar to End of Days, Constantine, and to an extent The Ninth Gate, the film loves to use cults, religion, and a mixture of genres to hit home its narrative. As mentioned above, it’s actually quite a stylish film, as far as a low budget film goes. The plotting itself tends to be pretty predictable after that opening sequence as it slows it down to introduce the audience to a small town that will be ground zero for the apocalyptic conflict between Vassey and the shadowy villain. The characters are generally cliché with the usual suspects all included, including the crazy man of town played with gusto by Tony Todd, but the film is anchored by another classic performance from Rooker. Plotting and character wise, Shadowbuilder is hardly all that original, but it does it with enough charm and heart that it’s easy to slip into the world.

Directed by Jamie Dixon, who is known for his very extensive work in visual effects, Shadowbuilder also loves to ham it up with some of its supernatural elements. The villain, a demon that’s intent on undoing creation, is always covered in shadow and uses shadow powers to take some souls and generally, pun intended, raise some hell. While the intent is intriguing, particularly since it leads to some fun sequences including a battle with a couple of shadow dogs that results in a fantastic moment where they rip the door off of a truck, the film plays with the “rules” of the villain’s abilities a bit too much. It takes away from the tension and adds too much of a perplexing feeling. I’ll give it to Shadowbuilder though that the villain and the horror sequences are a lot of fun and the cheesiness makes for quite the enjoyable time.

Once again, MVD Rewind comes up as a champion for this often-forgotten era of genre film. As with their release of Abominable, this one is a nice gem for horror fans to add to their collection. Bram Stoker’s Shadowbuilder is not the instant classic it might have been, but it’s a blissfully fun and hammy 90s film that navigates the multi-genre tone with energy and charm. The great cast only helps it out. For those looking for the next cult film, look no further than Shadowbuilder.