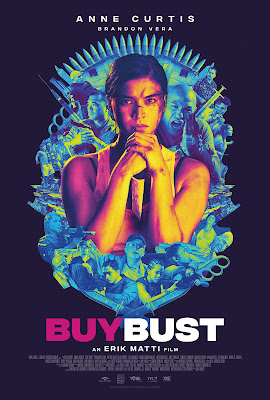 Filipino director Erik Matti has been around for much longer than most people know and his career has covered a ton of various genres and styles throughout the years. It wasn’t until the release of his dark and gritty thriller, On the Job, in 2013 that his name truly broke through into other currents of cinema. Although he has followed up On the Job with some diverse films, including a segment in the very entertaining ABCs of Death 2, it’s not until his latest film and the subject of this review, Buybust, that he has seen the same kind of hype. Sporting some fantastic marketing, including a brutal and intense trailer along with some strong word of mouth after it’s premiere at the New York Asian Film Festival, Buybust has created some lofty expectations going into the film.

The film meets those expectations with a hammerfist to the face.

Buybust is a brutal and engaging piece of pure action cinema, snarling with grounded tension and bursting at the seams with high powered ferocity. Matti has stripped the film down to the bare essentials, just giving the characters enough of a backstory for an audience to get invested and then he unleashes them into the familiar plotline of a well-equipped squad of police that walk into a drug deal that goes completely south. Narratively speaking, the film is not inherently dense or layered, using the usual idea that perhaps there is a much larger conspiracy that lead to this horrific event as the main dynamic between the characters as they must stab, punch, shoot, and run their way out of the situation. For those more discerning cinephiles, there might be problems with this narrative as most of the character development is rather subtle in the lines of dialogue between them or in their reactions to things, but for the sake of what this film intends it is the perfect approach. It allows the characters to come to life via the action and smaller moments rather than long, drawn out dialogues and heart-to-heart moments. Matti wanted a pure action film and that is what he delivers.

Naturally, Buybust is also a film that is simply brimming with style. Almost the entire film is caked in a rain-soaked neon lit glow, giving the patched together sets and maze-like alleys an almost supernatural feel. Once the drug bust goes sideways, the film takes on a nightmarish tone, forcing the police – very few of which are as clean and heroic as most action films like to portray their protagonists – through what could potentially be the various levels of hell. Each challenge is a new intense and seemingly unstoppable wave of violence. By the time the second act is moving along, it’s almost impossible to tell the criminals from the citizens or the cops from the criminals. Matti slathers the film in a very obvious political slant about the sheer chaos created by the ‘war on drugs’ in the Philippines, which is a tad overstated even for a film of this nature by the third act, but when an audience is so invested in the breakneck pacing and onslaught of threats that are presented in the film, it hardly comes as a shock that he would make his message as loud and as violent as possible.

The breakout stars of the film might be Buybust’s ace in the sleeve in terms of surprising quality. While the sheer mountain of muscle mass that is Brandon Vera does steal quite a few scenes as he seemingly takes on entire armies (and will not hesitate to throw entire people or motorcycles into the fray to make way for his hand-to-hand combat skills,) Anne Curtis stands out in badass fashion. Compared to some of her other co-stars, her small frame and massive personality shine out like a beacon in this film and she has the action chops to pull off some of the more impressive sequences, including a no-cut take that has her leaping across rooftops, spilling through alleys, and taking down dozens of baddies with her bone snapping street fighting skills. Between their on-screen personas, screen eating moments of badassery, and executing the impressively non-stop action choreography, I sincerely hope that Buybust leads to some international film success for the cast. They deserve it.

As it has been made as clear as possible, Buybust is hardly a bust at all. It’s a rip-roaring action ride that soars on the sheer balance of style, brutality, and smash-face pacing. The plot might run a bit thin and there are more than a handful of asinine character choices that serve only to keep the film moving, but the impressive visual style of the film and expert execution of the action make this film one of the must-see action films of the year. Matti has pulled off another fantastic film. Here’s to hoping that this one gets franchised. It sincerely calls for it.

Written By Matt Reifschneider
Posted by DarkReif at 10:27 PM