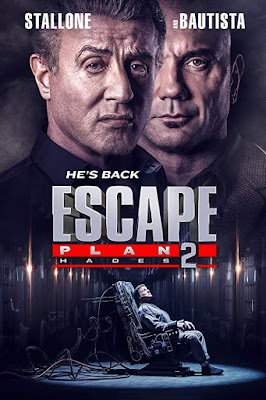 One of the more fascinating elements of American cinema is how the foreign box office has become a significant indicator of how successful a film is or isn’t. Not only in terms of the big blockbusters, but even for the middle of the road films. A film like Escape Plan, a mid-budget action thriller starring Sylvester Stallone and Arnold Schwarzenegger, stumbled at the domestic box office, but did surprising numbers overseas – specifically in China. It was enough that a sequel was announced later on and that it would be geared to appeal to that foreign market rather than the 80s meets modern action thriller that the first one meant to capitalize on. Thus, we have Escape Plan 2: Hades and the initial response from critics and fans alike were less than stellar. However, Hades is hardly just a throwaway sequel with a name attachment meant to continue a franchise. This film is an entertainingly silly sequel that truly attempts to create a more layered ‘conspiracy’ to further the events of the first film. Yes, to agree with most of the criticisms of this film, Hades is bad. I would never make the claim for it to be a good film, but it's going to find its cult audience in 10 years that thoroughly enjoys it for being so problematic and silly. I'll be waiting for you all to catch up with me.

Unfortunately, one of the biggest flaws with Escape Plan 2 is that the trailer for the film – well, all of the marketing truthfully – can be very misleading. Namely, the combination of Sylvester Stallone and Dave Bautista are definitely the secondary characters and not the main protagonists of the film. If you watched the trailers and looked at the cover, you wouldn’t know that the real main character is Huang Xiaoming as Shu Ren, one of the team members on Breslin’s team. This really isn’t all that shocking considering that the reason this film was made was the box office that the first film made in China. Still, for most western audiences going into the film this is a shock, even if Huang Xiaoming does an admirable job playing the arrogant lead that finds himself in a new detention facility called Hades. Stallone does have a decent sized secondary role, as he is given a larger subplot in helping find the new prison from the makers of The Tomb from the first film, but even then, he delivers more exposition than anything else. He’s given a couple of fight sequences, a solid gun fight with Bautista that was heavily featured in the trailers, but his fist to cuffs fight in the finale is a bit underwhelming thanks to some poor editing and highly stylized lighting. As for Bautista, yeah, that’s just a glorified cameo.

Going with this theme that Escape Plan 2 is more geared towards Chinese audiences though, this sequel is also less of a throw back to 80s action thrillers like the original and it’s more of a futuristic martial arts thriller. Just within the first act there are multiple hand to hand combat sequences and once our hero gets thrown into Hades, he learns that the villainous Zookeeper makes the ‘animals’ in the prison fight one another in some kind of martial arts tournament. It’s not heavily focused on, thanks to the film trying to maintain the same structure and narrative of the first one (it’s a reverse heist film?) as they solve the mystery of this puzzle box prison to figure out why they are there and how they can get out. Still, the heavier science fiction influence on the prison itself, including robots and laser shock air (?!) make the film increasingly silly and perplexingly outlandish as it goes.

Escape Plan 2 attempts to jam too much into its narrative. Too many characters, too much genre shifting, and too much mythology building to be the efficient film it thinks it is. Still, as it goes, the strange swings in tone, the quick shifts of style, and the increasingly silly twists made me enjoy the film quite a bit as a ham-fisted piece of B-grade action entertainment. Of course, I am previously a fan of Steven C. Miller from his other films (The Aggression Scale, Silent Night, Marauders, Extraction are all fun little flicks, in my humble opinion) and his style is one that may not appeal to those who prefer older action directors with his tendency for modern elements. Even then, although he tends to shake the camera a bit too much or edits a bit too quickly to allow the older action elements to come to the forefront, he handles the film with as much style as he can muster to power it through the problematic script. At times it feels like Fortress with a big of modern Hong Kong style. Take it or leave it.

Escape Plan 2: Hades is a very problematic film. That I cannot deny. The script is patchy, it jams in way too many things into a basic concept, and the trailers and marketing certainly tricked a lot of the fans into thinking that this film would be one thing (a Sly vehicle) when it was more focused on delivering elements to the Chinese audience it was geared towards. However, even with that, once the expectations were placed where they needed to be, I found a ton of enjoyment in the film through its odd choices and intriguingly silly focuses. For all of the reasons that the film is problematic, I found it very entertaining. To make things even more interesting, it sounds like the third Escape Plan film is already done.